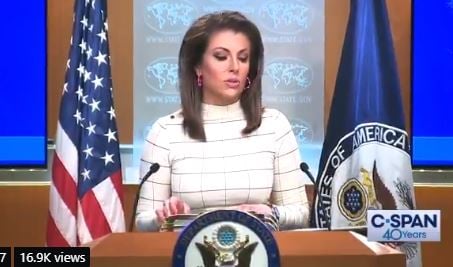 It looks like the good ole boys in Tennessee don’t want outsiders taking their cake.  The state passed a law that prevents outsiders from running for a US House if they haven’t lived in the state for three years.

Tennessee Republicans changed the law which prevented President Trump’s pic for the House in the state from qualifying for office.

A Trump-backed congressional candidate in Tennessee’s primary race was booted from the ballot after the local GOP voted to remove her because she had only just moved to the state.

Morgan Ortagus served as the State Department Spokesperson under former President Donald Trump and is currently a Navy Reserves officer. She was running to represent the district that encompasses Nashville, but is now unlikely to be able to continue her effort.

Trump had endorsed Ortagus in her bid to represent Tennessee’s 5th congressional district.

‘President Donald Trump believes I’m the best person to fight for his America First agenda and Middle Tennessee in Congress, and I’m working hard to ensure that my fellow Tennesseans, including TNGOP SEC members, understand why,’ Ortagus said in a statement on the decision to remove her.

‘As I have said all along, I believe that voters in Middle Tennessee should pick their representative — not establishment party insiders,’ she continued. ‘Our team is evaluating the options before us.’

The vote came after the GOP-controlled state legislature overwhelmingly passed a bill that requires congressional candidates to live in Tennessee for three years to qualify to run on primary ballots.

Republican Governor Bill Lee allowed the bill to become law after failing to sign it in the 10-day period.

Had the law taken effect before the April 7 filing deadline, it would have disqualified Ortagus from even filing on the primary ballot, but a spokesperson for Tennessee’s secretary of state’s office said it would not apply retroactively, according to the Associated Press…

…Two other candidates, Robby Starbuck and Baxter Lee, were also taken off the ballot.

The Tennessee Republican Party on Tuesday voted to remove three congressional hopefuls from the primary ballot in the new-look 5th Congressional District, including a Trump-backed candidate whose campaign riled some political insiders in the state.

The RINOs in the Republican Party will do anything they can to keep their power.  Like the Democrats, they will do anything, including changing rules that fit their agenda or ignoring election laws, like many states with Republican legislatures did with President Trump.

We saw similar actions as these across the country in states led by Republicans.  The leadership of the party is like Mitch McConnell – old, cunning and power-hungry.   McConnell forgot that he works for the people and they don’t work for him.