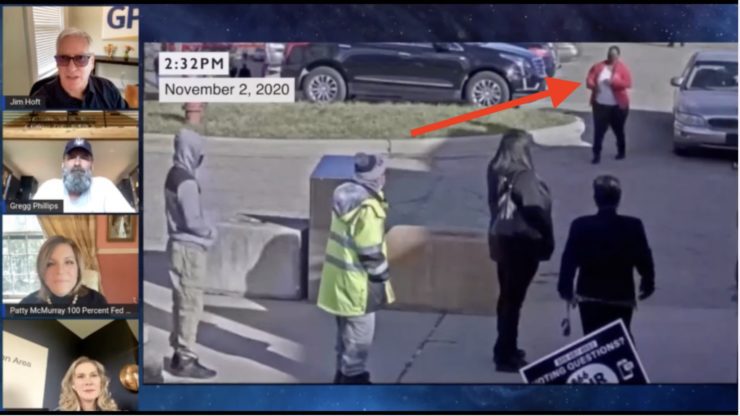 True the Vote founder Catherine Engelbrecht and Gregg Phillips have been working with Dinesh D’Souza to create a bombshell movie that uses footage they obtained of ballot boxes in key states across America to steal the election in 2020.

Using commercially available geo-tracking cell phone data, True the Vote was able to take footage from drop boxes across America in key states like Georgia, Arizona, Pennsylvania, Wisconsin, and Michigan to track over 2,000 mules (illegal ballot harvesters) wearing gloves and disguises to stuff ballot boxes. The ping data and footage that was obtained by True The Vote.

Earlier tonight, Jim Hoft of the Gateway Pundit and Patty McMurray of 100 Percent Fed Up interviewed Catherine Engelbrecht and Gregg Phillips to ask about the incredible work they did to uncover a massive coordinated criminal ring that was spread across several critical swing states that Trump won in 2016, but curiously, lost in 2020.

The Gateway Pundit and 100 Percent Fed Up were able to provide footage from the drop boxes in Detroit to True the Vote to be used in the “2000 Mules” movie.

Thanks to the hard work and commitment of the Michigan Citizens For Election Integrity (MC4EI) and their team, who poured over hours of dropbox footage, we are able to begin sharing with our readers some of the stunning footage we showed during our interview with Catherine Engelbrecht and Gregg Phillips.

In Michigan, according to M.C.L.A. 168.764a: An immediate family member or household member may deliver a ballot to the clerk for the voter.

In the video below, a woman, who is the passenger in a silver sedan, can be seen pulling up to the Farwell Recreation Center at 2711 E. Outer Drive in Detroit, MI. The camera catches her leaving the parked vehicle and walking with a stack of ballots in her hand to the absentee ballot dropbox. As she approaches the dropbox, a person behind her pulls up, rolls down the window, and appears to hand her a ballot (or ballots?) to drop in the box. She appears to take the ballot (or ballots?) and places it (them) into the dropbox for the person in the vehicle behind her. Next, she looks down at her stack of ballots and realizes they have not been signed. She takes the ballots back to the vehicle and fishes for a pen. Once she locates a pen, she begins to sign each individual ballot and stack them on the dashboard. When the video is slowed down, the pen she is signing the ballots with is visible to the camera.

After she’s signed all four ballots, she positions them in a neat pile (likely so it’s not obvious to the camera observing the dropbox that she’s carrying more than one ballot) and walks back to the dropbox and inserts them into the slot, and walks away. Here’s a clip from his upcoming movie “2,000 Mules,” which uncovers the multiple ways ballot harvesters stole the 2020 election.

Snapping photos to get paid.

A coordinated ring of illegal vote harvesting in all the key states where the election was decided.