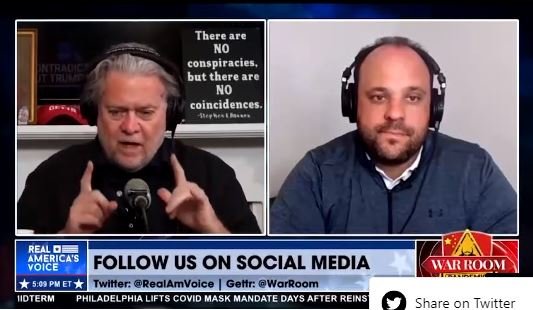 On Thursday The New York Times investigative reporters Jonathan Martin and Alex Burns released passages from their latest book “This Will Not Pass: Trump, Biden, and the Battle for America’s Future.”

In the book the two claimed that GOP House Leader Kevin McCarthy told Liz Cheney on a January 10, 2021 call that he would counsel Trump to resign before the end of his term.

When the claims within the book broke early in the news, McCarthy’s spokesman Mark Bednar refuted them saying, “McCarthy never said he’d call Trump to say he should resign.”

McCarthy himself called the claims about his conversations “totally false” when The New York Times reported on them earlier in the day.

Kevin McCarthy released a statement on Twitter following the NY Times report. He insisted the claims were false.

During the call, McCarthy told Liz Cheney that he would counsel President Trump Trump to resign. This is exactly what the book reported. Liz Cheney released the call to the authors. And now Kevin McCarthy was caught in a lie.

This was not a surprise to those who follow Kevin McCarthy closely.

Steve Bannon: Ther’s two choices. McCarthy’s got two choices. He either heaves to on a full MAGA agenda. FULL MAGA. That means he’s gotta stop this nonsense… As President Trump says, “No games!” None of the Nancy Mace crap down in South Carolina. None of the stuff against Joe Kemp. No going against MAGA candidates. So he’s either got to heave to 100% or he’s gone.”

The post STEVE BANNON Delivers Warning to Kevin McCarthy: “He Either Heaves on a Full MAGA Agenda or He’s Gone” (VIDEO) appeared first on The Gateway Pundit.