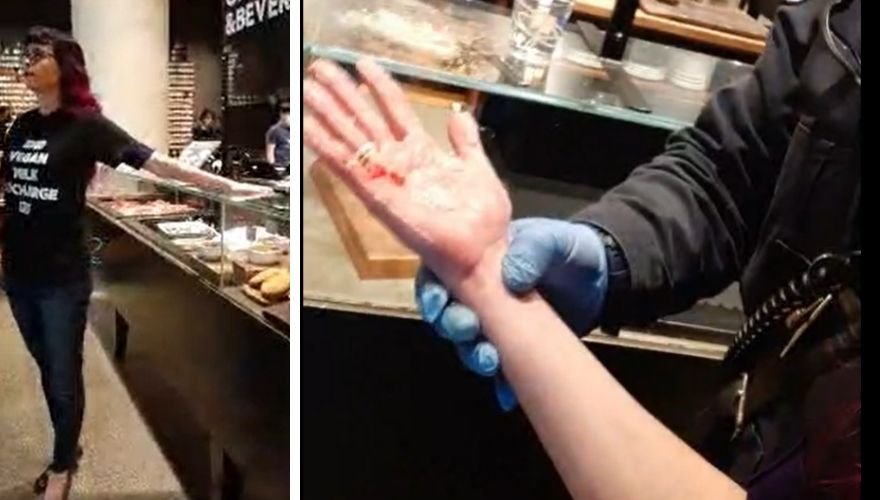 Two PETA activists were deployed to the lonely early-morning Starbucks HQ in order to superglue themselves to display cases in protest of the 80 cents Starbucks charges customers who ask for a ‘vegan alternative.’

In a move underscoring the increasingly petty and unintentionally distracted behavior of climate activists, Starbucks was targeted for apparently killing our planet by asking patrons to pay eighty cents more for a vegan milk substitute in their seven-dollar seasonal latte. Their ‘beef’ is with the cows used to produce milk which, when excreting bodily waste and flatulence, contribute a significant amount of greenhouse gases according to environmental scientists.

But at the heart of the issue, which PETA won’t admit, is that their climate activist adherents are just too weak-willed to follow the church of green energy. Seduced by just a latte, it seems, energy-conscious consumers dispense with the pretense that they really ever cared. Apparently, animal rights extremists and global warming alarmists have much work to do in the battle of winning hearts and minds. They might wish to consider foregoing plans to introduce bug-based diets to American consumers and start with getting their reverent followers to order an espresso instead.

PETA marched into the status symbol’s headquarters in Seattle, chanting “save our planet, save the cows,” while suggesting that merely making vegan options more cost-friendly would have an impact on the greenhouse emissions they’re so distraught over.

There’s just one problem. For a group of bleeding hearts who portray themselves as acting on their love for animals and trusting the science, they’re not exactly telling people what the ‘science says.’  Lead researchers have indicated that, if one truly wanted to reduce methane from the dairy industry, slaughtering—not saving—dairy calves earlier is the method to obtain the desired results.

After about an hour of standing around glued to a glass counter, emergency responders were able to detach the attention-seekers and detain them.

At the end of the video, the female activist let forth a subtle warning to the responder working to remove her hand from the glass display case. “Looks like we’re going to be ending the live stream in just a few minutes as soon as we’re unstuck,” she said, adding “looks like they’re going to try to make sure we don’t get any chemical burns or injuries or anything like that. There have been a couple of spots that have not felt very good. And I am unstuck. Is that blood? I’m bleeding a little bit.”