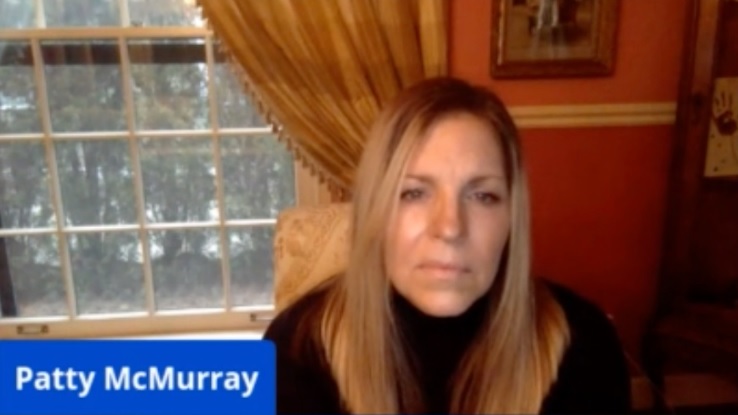 Patty McMurray of 100 Percent Fed Up was on the Joe Hoft Show at the Real Talk Radio Network on Wednesday.  She discussed the recent MAGA candidate sweep in Michigan and the RINOs in the state.

Patty McMurray from 100 Percent Fed Up and a contributor at The Gateway Pundit was on the Joe Hoft Show. For over a decade, she has been behind the efforts in Michigan to turn the state red.  She worked with good friends and fellow patriots like Meshawn Maddock and her husband who President Trump has endorsed for Michigan Speaker of the House.

These individuals were instrumental in turning Michigan red and worked very hard recently to beat the RINOs in Michigan in picking Trump candidates Kristina Karamo for Secretary of State and Matt DePerno for Attorney General for the Republican ticket. Patty shared that the grassroots movement in Michigan is second to none in taking back the Republican Party from the Deep State RINOs.  The Michigan Conservative Coalition (MCC) team held hundreds of lunches and events for candidate Trump in the state and helped to get him elected in 2016. Because of their efforts, and the efforts of other hard-working grassroots groups across Michigan, hundreds of delegates from the grassroots movement then showed up recently at the state convention in Michigan and chose the Trump-endorsed candidates. Ronna McDaniel, however, was recognized for this Michigan win for candidate Trump in 2016 and she was given the position as the national Head of the Republican Party.  Patty shared:

After the election, Ronna, who went by Ronna Romney McDaniel… dropped “Romney” when her uncle became very unpopular and became Ronna McDaniel.  In the [2016] election someone from her office called Marian Sheridan, who I mentioned before, who’s the grassroots vice-chair, and asked if she could please find 35 people who would work at the TCF Center…because they didn’t have a single poll-challenger working at the TCF Center where literally tens of thousands of ballots were coming in to be counted.  There was nobody there.

‘These people stopped a lot of shenanigans that day in 2016,” and as a result, Trump became the “first Republican to win the state of Michigan since Reagan.”

In 2020, Marian Sheridan rounded up hundreds of volunteers again, to work at the TCF Center. Those people applied to be poll workers and you had to identify the party you were affiliated with when you applied and I don’t need to tell you, the Detroit Elections people would not hire Republicans.  Once you put “Republican” on your application they wouldn’t even call you back.

On November 6, McDaniels stood in front of the media and bravely proclaimed that the Republican Party would fight to make sure the elections were free and fair, telling them, “Every candidate in every office from President down to the local level has the legal right to challenge irregularities that occur in the process of canvassing ballots.” She added, “We intend to ensure that every lawful voter has their vote counted in accordance with the law, that observers are granted the access they are due under state law, and that any irregularities that occurred whether by malicious intent or incompetence, are fully investigated to the fullest extent allowed under the law.”

Romney-McDaniels told them, “We will not give up on this process until every last issue has been resolved.”

She cited a number of shocking incidents reported to them by poll watchers, including threatening and intimidating behavior by election workers.

Curiously, after Joe Biden’s inauguration, the RNC Chair who was given a second term by President Trump suddenly expressed regret for her decision to stand up for the millions of Americans who believe massive voter fraud took place in the November 2020 election.

In an interview with The Hill, Romney-McDaniel explained that she regrets letting former President Trump’s lawyers, namely Rudy Giuliani and Sidney Powell, spread unproven claims about the 2020 election from the organization’s headquarters.

Patty shares more about the recent work in Michigan by Patty and others where they identified multiple operators who dropped off multiple ballots in the middle of the night.  She also noted that the Soros-backed Secretary of State Benson told clerks across the state to ignore signatures on absentee ballots in the 2020 election.

Listen to more below:

In our interview, Patty mentioned a team of Michigan heroes, Joe Brandis, Dr. Becky Behrends, Phil O’Halloran, Lori Skiba, and others who are making important discoveries as they pour through 24 terabytes of dropbox surveillance film from 36 absentee ballot drop boxes located around Detroit leading up to the 2020 election.

The post HOW MI GOP Grassroots Are Fighting Back Against GOP Elites—And WINNING!—Patty McMurray of 100 Percent Fed Up on Joe Hoft Live appeared first on The Gateway Pundit.