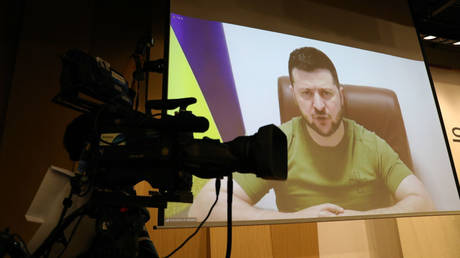 Ukraine’s finance minister, Sergey Marchenko, has solicited at least $2 billion per month in emergency economic aid from the Biden administration. The official also revealed that Kiev hopes to raise an additional $3 billion per month from other sources.

Speaking to the Washington Post, Marchenko said that Ukraine needs “to cover this gap right now to attract the necessary finance and win this war.”

During his visit to Washington, DC last week, Marchenko met with a number of senior US officials, warning them that absent the requested financial support, Ukraine would likely not be able to cope with the humanitarian crisis brought on by Russia’s military offensive. A total of $5 billion per month is needed to cover Ukraine’s immediate needs in April, May, and June, the minister explained. In addition to that, Kiev is expected to request another tranche down the road to help Ukraine recover from all the damage incurred.

Since the start of Russia’s military offensive in Ukraine in late February, the US has already shelled out approximately $1 billion in economic aid for Kiev. An additional $500 million was cleared by the Biden administration last week, on top of the generous military aid.

Yellen told reporters last Thursday that America has to “find ways to meet Ukraine’s needs.” She added that this “will involve going back to Congress with a supplemental request.” Her comments came shortly after President Joe Biden made it clear that he would ask Congress to give the green light to more financial assistance for Ukraine – something an anonymous US official described to the Washington Post as one of the administration’s top priorities.

Several members of Congress and senior Ukrainian officials alike have repeatedly suggested handing frozen assets belonging to Russia’s central bank over to Ukraine. However, the Biden administration has stopped short of making any promises so far. Yellen described this potential handover as something she “wouldn’t want to do so lightly,” telling reporters that “it’s something that I think our coalition and partners would need to feel comfortable with and be supportive of.”

The Ukrainian finance minister told the Washington Post that his country needs the money to provide care to millions of internally displaced Ukrainians, as well as paying pensions to retirees and salaries to medical and education professionals.

Marchenko concluded by saying that Washington has become “more cooperative” over time, adding that support from the US is “becoming greater and greater.”