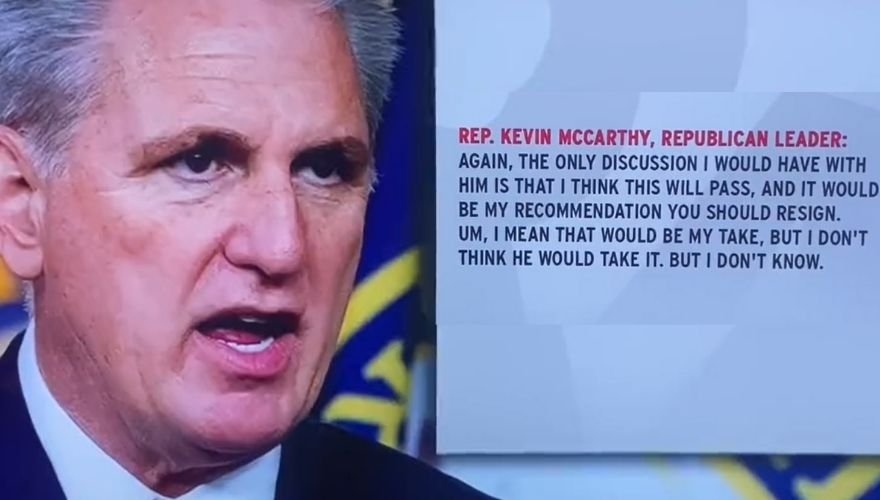 On January 10, 2021, Kevin McCarthy spoke with several GOP House leaders including Liz Cheney who was third-in-line in the House Republican Caucus at that time.

During the call, McCarthy told Liz Cheney that he would counsel President Trump Trump to resign.

Kevin McCarthy:  “I think [impeachment resolutions] will pass, and it would be my recommendation you (President Trump) should resign… What he did is unacceptable. Nobody can defend that and nobody should defend it.”

McCarthy also indicated that he believed Twitter and Facebook should delete the accounts of lawmakers who were supporting Trump’s claim of a rigged election. “We can’t put up with that,” he said. “Can’t they take their Twitter accounts away, too?”

While pushing for it on his fellow party members!

Companies like Facebook and Twitter have special protections in something called #Section230. But Big Tech is abusing those protections and choosing to censor Americans with different political views.

It is time to #Scrap230 and start over. pic.twitter.com/IaX8AZCJ9N

The President tweets that people should stop breaking the law and Twitter moves to censor him.

The left is uncomfortable that in a vibrant democracy, citizens have a right to hear directly from their President and decide for themselves what to think about it.#StopTheBias!

The post THEY HAVE IT ON TAPE! Kevin McCarthy Told GOP Leaders Twitter and Big Tech Needed to Strip Accounts from Fellow GOP Lawmakers — AFTER CUTTING VIDEO AGAINST CENSORSHIP! appeared first on The Gateway Pundit.