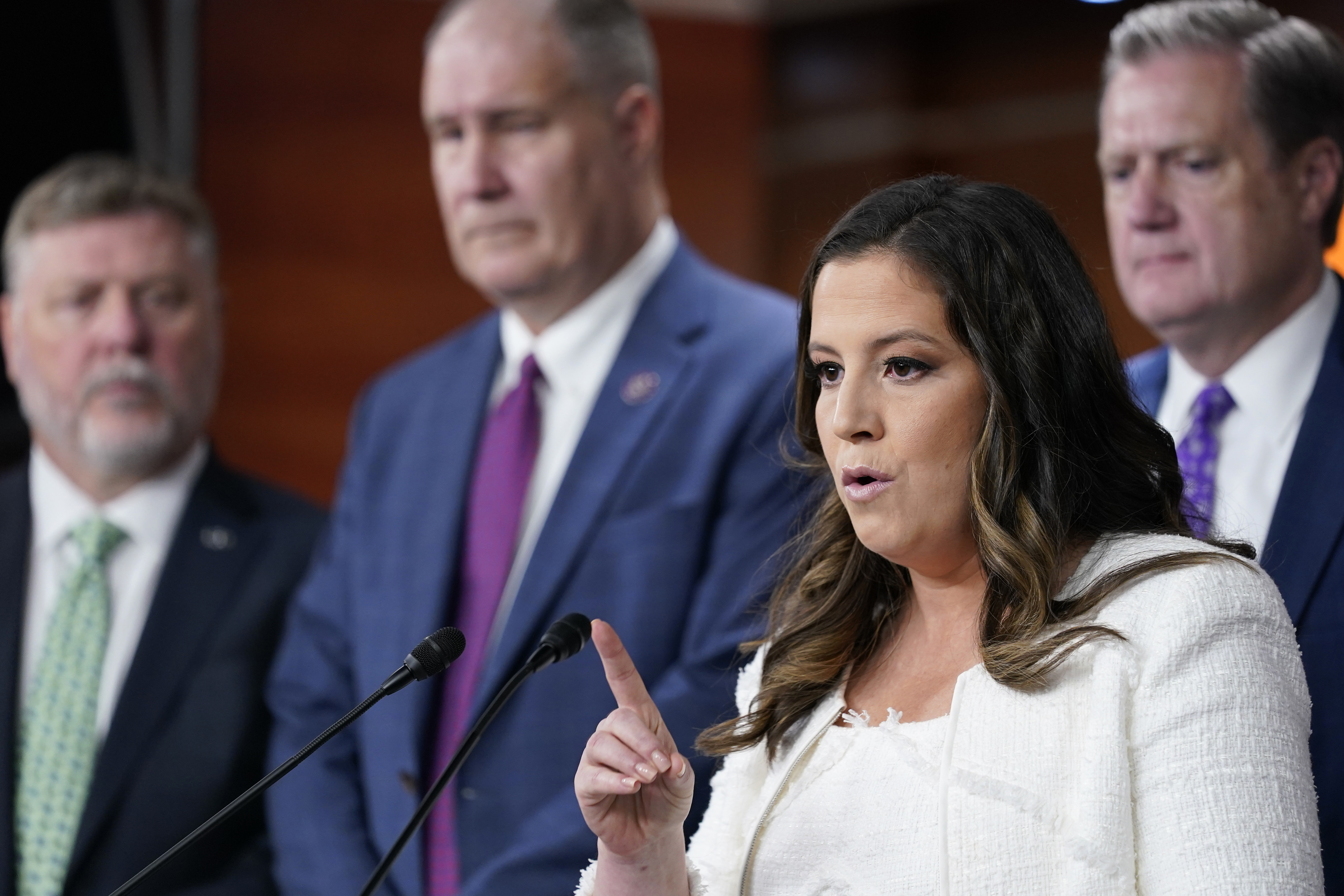 “I think races are healthy,” the first-term Floridian said in an exclusive interview, saying his plan “hasn’t changed” despite Stefanik’s formal confirmation that she’s seeking reelection in leadership after flirting with a bid for whip next year. “Competition is a healthy thing.”

“At the end of the day, the members want us to make sure that the best person can represent the conference at a time where we’re up against some of the worst policies this country’s ever seen,” Donalds added. “And we have to reverse course immediately, and I think I have a unique ability to help with that.”

Donalds spoke an hour after Stefanik announced she would seek re-election to the conference chair role should Republicans win the majority in November as expected. Her decision — despite a past pledge to conservative skeptics that she’d only serve one Congress — came as no surprise to some in the GOP, given the possibly crowded future battle for majority whip and her potentially blocked path to the Education and Labor Committee’s gavel next year.

And Stefanik now boasts broad support within the conference, winning praise from centrists and conservatives alike for her stewardship of House GOP messaging after leaders anointed her to replace Rep. Liz Cheney (R-Wyo.). Many House Republicans have said for months that the New Yorker would coast to reelection as No. 3 leader if she chose to run again — which leaves Donalds as an unlikely aspiring spoiler of Stefanik’s recoronation.

The 43-year-old, a member of the pro-Trump House Freedom Caucus with a background in banking and insurance, didn’t exactly hide his plans to seek the spot. After POLITICO first reported last month that Donalds was weighing a run for conference chair and then first reported a Thursday reception to kick off his leadership bid, Stefanik’s silence about her own future got scrambled and she confirmed her run.

“It appears that way,” Donalds said when asked if he saw his own moves influencing Stefanik to go public. “My intention wasn’t to force a decision by Elise. It’s something where there were other members asking me.”

He has hired Nicholas Raineri, a former aide to conservative Rep. Jim Banks (R-Ind.) who’s also advised the centrist GOP Main Street Caucus, as a special adviser to help with member outreach in the conference chair race. Donalds also said he met Monday with former President Donald Trump — whom Stefanik made her name defending during his first impeachment — but declined to discuss the nature of their lunch, beyond the fact that the conference chair race came up.

If Donalds can break through, he’d help the GOP conference make good on its long-held goals of more diverse representation, burnished through active recruitment of candidates of color. But he’s a long shot at best in the race.

“I am proud to have unified the entire Republican Conference around our country in crisis message and shattered fundraising records as House GOP Conference Chair raising over $10M for candidates and committees this cycle,” Stefanik said in a Tuesday statement.

And some Republicans aren’t thrilled by Donalds’ decision to challenge her. One senior GOP lawmaker, speaking candidly on condition of anonymity, called it a “needless fight” at a time when the party should be focused on winning enough seats this fall to bring a workable majority to the next Congress.

This senior Republican asked what Stefanik has “done wrong to deserve to be bounced,” adding: “It’s really important, before you seek a leadership position, to seek counsel — and to seek wide counsel — to understand the consequences of engaging in conference politics.”

A person close to Stefanik said she has already locked up two-thirds support among the conference, projecting confidence in her victory. Rep. Kelly Armstrong (R-N.D.), a member of the House GOP campaigns team, said he’s with her.

“Everybody can run if they want to. But I think Elise has done a tremendous job,” Armstrong said. “I’m really impressed and she’s gonna be a big part of why we win back to the majority … I think she deserves the chance to do the majority.”

That leaves Donalds hoping to pick up support among Freedom Caucus members, his fellow Florida delegation members and incoming members-elect. He said Stefanik has “done a good job” but his choice is “not really about Elise,” touting his ability to appeal to “people who typically are not Republicans.”

Rep. Ralph Norman (R-S.C.), a member of the Freedom Caucus, declined to say how he would vote until he speaks to every candidate but expressed the desire for the pro-Trump group to have more representation in leadership.

Donalds is “special, because he’s in the Freedom Caucus,” Norman said.

Freedom Caucus Chair Scott Perry (R-Pa.) declined to say if he would support Donalds but called his leadership bid “very interesting” and “a positive sign for the whole conference.”

Another Freedom Caucus member, Rep. Dan Bishop (R-N.C.), said he’s backing Donalds and subtly alluded to past criticism Stefanik took from the right for her history of centrist votes by saying he’d “love to see a conservative” in the role.

Both Stefanik and Donalds would bring their own liabilities to a post that attracts more attention in the House’s majority party.

Stefanik’s stumbles this Congress have included endorsing controversial congressional hopeful Carl Paladino, who lost his primary, and a tweet her aides deleted from the House GOP account that blasted former Trump aide Sarah Matthews for testifying before the Jan. 6 committee — while Matthews worked for a sitting member.

Even so, no members publicly describe those moves as relevant to the conference chair race.

Donalds, for his part, has made controversial arguments, including a CNN interview where he defended his reasons for not getting the Covid vaccine. He and a fellow conservative, Rep. Mary Miller (R-Ill.), also stoked the ire of conference colleagues by claiming that GOP members voted for a bill that would create a vaccine database, despite that legislation’s stated safeguards against government tracking.

And while her leadership bid might appear to break her previous term limit pledge, hardly a rare move for an ambitious lawmaker in either party, Stefanik’s team is now denying that she made any such promise after months of declining to comment on the matter.

“She never committed to only running for one term,” Stefanik’s chief of staff Patrick Hester said in a statement.

But Donalds himself has a simpler pitch for leadership: He talks about converting to the GOP later in his life.

“I found conservatism 14 years ago. And I found it because the policies I saw coming out of Washington were not going to help America. And I think that that perspective and that background can only help our ranks grow as a party,” Donalds said.

“The members know that I’m easily one of the best on Capitol Hill to do it.”