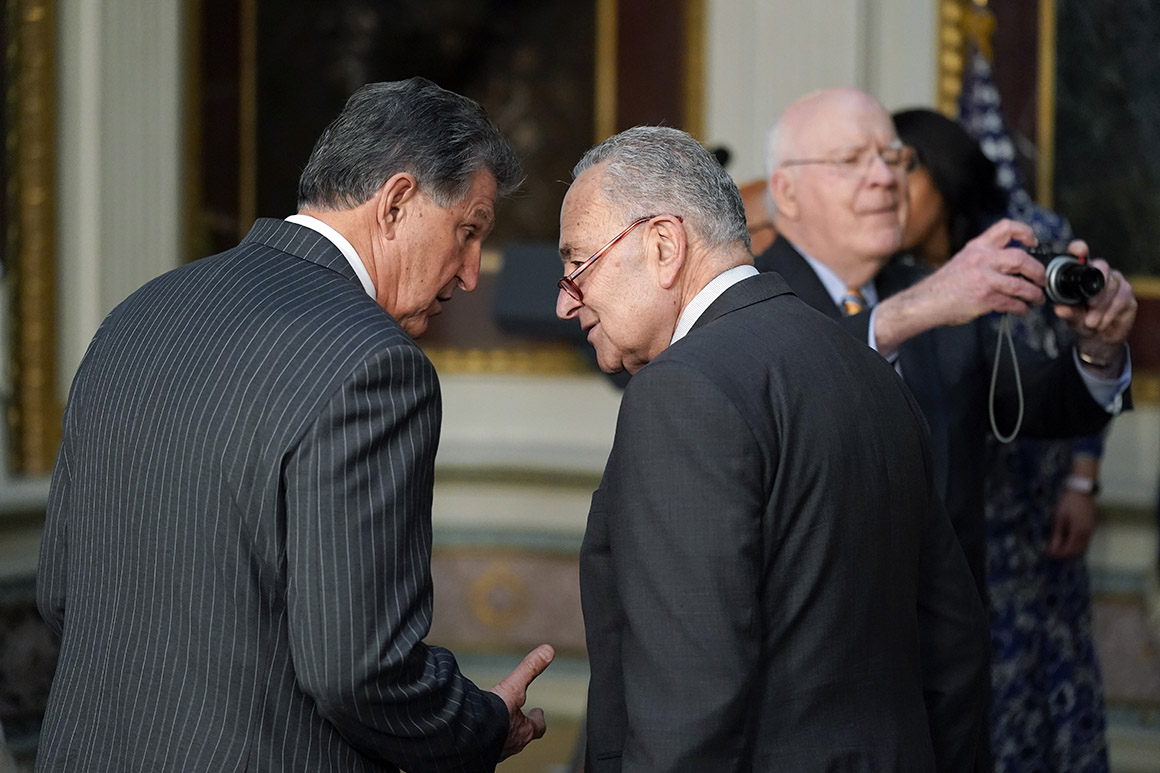 Chuck Schumer’s negotiations with Joe Manchin on their party’s domestic agenda were delicate even before the famously chatty majority leader caught Covid. Now he’s digging in for Congress’ most high-stakes work from quarantine in Brooklyn.

Sidelined and leading an in-session chamber from afar, Schumer is going all-out behind the scenes to steer the floor while keeping negotiations with Manchin alive. His pandemic predicament comes as July assumes an outsized role in his leadership of history’s longest-running 50-50 Senate.

Manchin and Schumer have spoken more than a half-dozen times, mostly in person, about party-line legislation once seen as a progressive centerpiece. Now the West Virginia centrist envisions the Democrats-only, filibuster-proof bill as a way to fight inflation as well as boost clean energy and fossil fuels.

Manchin said in an interview that he and Schumer will need to talk again this week or next to keep negotiations going. He also raised questions about whether a party-line bill is the right approach, summing up their relationship this way: “We understand each other well enough.”

“We can agree to disagree, we can agree to try and find a moderate middle. He knows that I’m not in the base camp far to the left; that will never happen,” Manchin said Tuesday. “He knows exactly where I’m at. Now whether they can get there or whatever, we’ll see.”

Nearly a year ago, Schumer and Manchin privately inked an agreement on a $1.5 trillion iteration of the bill the voluble New Yorker is now laboring to revive after Manchin pulled the plug in December. That their talks remain on uncertain footing reflects just how critical the party-line bill is to Schumer’s legacy as he balances multiple goals: holding onto Senate control past this fall, confirming as many of Joe Biden’s nominees as he can, passing his dearly sought U.S.-China bill and clinching a deal with Manchin.

Schumer conducted two leadership meetings and a full caucus meeting virtually this week while battling Covid and spoke to Manchin Monday about the climate, prescription drug and tax bill that is captivating Senate Democrats. In Tuesday’s caucus meeting, Schumer indicated it’s his goal to put a Manchin-backed bill on the Senate floor before the August recess, using filibuster-evasion powers that expire Sept. 30, according to attendees.

While helming the evenly split Senate, Schumer’s steered his caucus to approve a huge party-line coronavirus aid bill and a new Supreme Court justice as well as clinch bipartisan deals on gun safety and infrastructure investment. But the party, and Schumer, has fallen short of several broader priorities: elections reform, codifying Roe v. Wade into law, raising the minimum wage and approving the sprawling Build Back Better bill that Manchin quashed last year.

That makes finishing a party-line bill that much more important in Schumer’s push to hold the Senate and enact more of Biden’s agenda. And he’s doing it with his signature mile-a-minute style, even amid mild Covid symptoms.

“He’s on the phone, he’s on Zoom, then he’s back on the phone. Chuck is still in the middle of everything,” said Sen. Elizabeth Warren (D-Mass.). “Chuck, I think, has had a phone surgically attached to his ear for years now.”

Schumer is intentionally saying little about the closely held talks with Manchin, giving his caucus a general update on Tuesday about the scope of the party-line bill. It’s set to fund new energy investments, reduce drug prices, raise some taxes on high earners and corporations and reduce the deficit. Thanks to the so-called budget reconciliation process, it will require only a simple majority to pass.

Schumer told Democrats he’s optimistic, and they believe him. As Sen. Tim Kaine (D-Va.) said: “He’s not a good poker player on stuff like that.”

But Manchin is less positive in public, saying he’s not fully committed to another party-line bill because “if I’m just doing something on one party line or the other party line, I’m not better than the rest.”

He suggested that trying a bipartisan approach to lowering the cost of prescription drugs could be worthwhile, to at least test where Republicans stand. And Manchin decried Senate Minority Leader Mitch McConnell, who’s sought to praise Democrats’ two influential centrists, for cutting off talks on a U.S.-China competition bill while Democrats discuss a possible reconciliation bill.

“That’s as bad as the hardcore progressives on the House side did with infrastructure,” Manchin said, referring to liberals’ initial rejection of the bipartisan infrastructure law he helped craft because Manchin had not yet agreed to the party-line Build Back Better bill he eventually sank.

Normally, having to take such pivotal discussions online could be perilous for the two senators: Everything plays differently in person compared to over the computer. Yet Democrats say that Manchin and Schumer’s decade-plus working together gives them a foundation for continuing negotiations from afar.

“It’s always difficult for an engaged and intense member to be absent,” said Sen. Chris Coons (D-Del.). “But where you already have a deep relationship and a strong understanding of each other, you can make do. You can make it work.”

It’s not just Manchin who Schumer has to monitor from Brooklyn. Sen. Bernie Sanders (I-Vt.) hinted on Tuesday he has more to say about the narrow party-line bill that Manchin and Schumer are discussing: “We have very strong thoughts about reconciliation that we’re working on right now. Schumer knows my views very well. We’ll get them out soon enough.”

Apart from the talks on the party-line spending and tax bill, running a 50-50 Senate on a day-to-day basis is challenging enough. Schumer and Sen. Richard Blumenthal (D-Conn.) each have Covid. Nonetheless, the Schumer-less Senate plowed forward and confirmed its second ATF director in the history of the gun regulatory agency on Tuesday.

To keep those wheels turning, Schumer’s staff is working in tandem with Senate Majority Whip Dick Durbin (D-Ill.), his former Hill roommate. The two talked deep into the night on Monday to keep the evenly split chamber on course.

“Oh my God,” Durbin said of how close Schumer is keeping tabs on things. “I don’t think he’s missed a beat.”

If there’s one void with Schumer physically absent, it’s in the daily floor speeches in which the leader often castigates Republicans and bucks up Biden and Democrats’ priorities. With Schumer on the disabled list for the week, McConnell has leaders’ designated floor time all to himself.

Marianne LeVine contributed to this report.