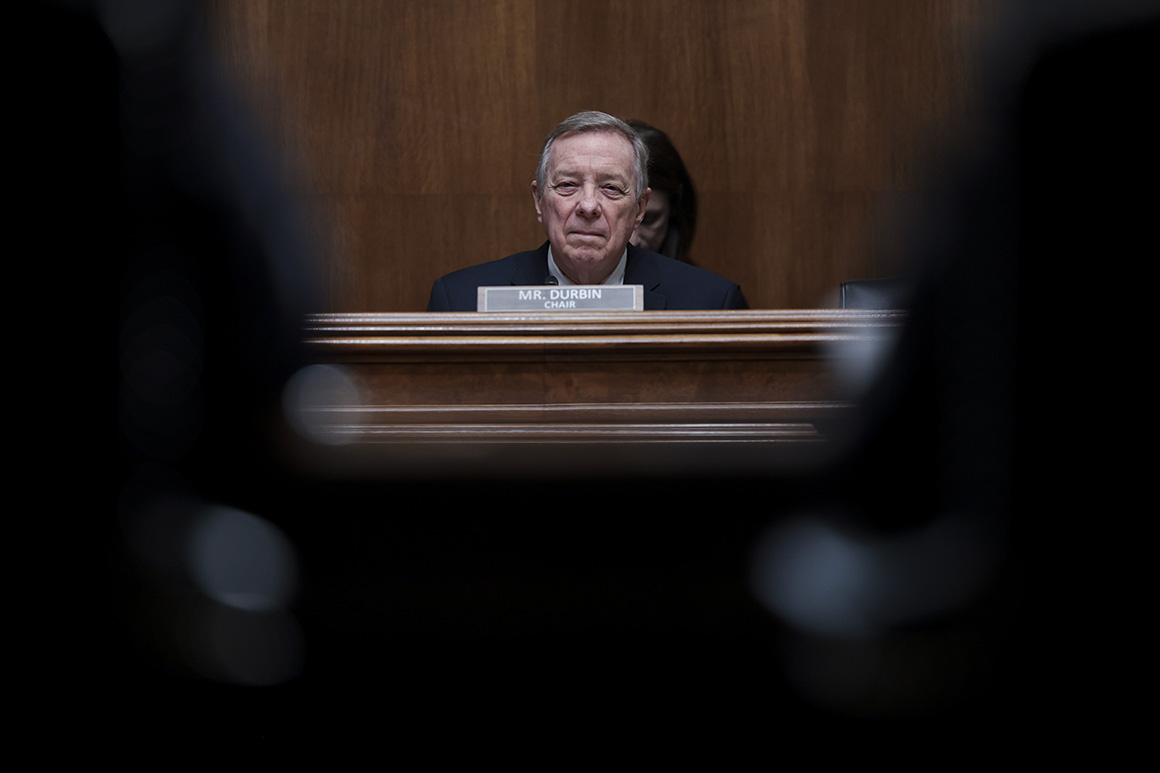 As House Democrats brace for a potential leadership shakeup if they lose power this fall, Chuck Schumer and his team are settling in across the Capitol regardless of who is in charge.

All four top Senate Democratic leaders, including the New Yorker at the helm, are preparing to run again for their current posts, according to multiple senators and aides. It’s a sign that the 50-member Democratic caucus is largely satisfied with the results of a taxing but surprisingly productive run with the narrowest of majorities.

The most intrigue in the caucus is over who will chair the party’s campaign committee through a 2024 cycle with a rough map. But there’s little chance of a challenge to Schumer — or anyone else for that matter, at least at the moment.

“It’s an honor to serve as the leader of the Senate Democratic caucus, and I will continue to do the best job I can do for the good of the caucus and the country,” Schumer said in a statement for this story.

Their leadership team has earned another two years, in Senate Democrats’ view. After a 2021 with a party-line win on coronavirus recovery and a bipartisan infrastructure law, Schumer led the way this year on a huge follow-up filibuster-proof bill focused on taxes, health care and climate change. That’s on top of bipartisan deals on microchip manufacturing and firearm access, the confirmation of Supreme Court Justice Ketanji Brown Jackson and even student loan relief sought by Schumer.

What’s more, Senate Democrats are in contention to hold the Senate — and Schumer thinks they might even pick up seats. It’s a clear contrast with the House, where Democrats are fighting long odds in their bid to keep the chamber. Their top three leaders are all five years older than the oldest Senate leader, Majority Whip Dick Durbin, and face long-standing pressure to make way for a new generation.

Sen. Brian Schatz (D-Hawaii) said the caucus is overall pleased with its leadership: “You don’t get major legislation through without a few people to be grouchy about a few things. But victory has a way of healing.”

As for the next leader of the Democratic Senatorial Campaign Committee, current Chair Gary Peters (D-Mich.) isn’t up for reelection until 2026 so could theoretically do it for another cycle; an aide said “right now he’s totally focused on 2022.” Another potential name that’s circulated among Democrats is Sen. Alex Padilla (D-Calif.), who’s up for reelection this year. He’s also focused on the midterms for the moment, according to an aide.

One certainty is the retirement of the Senate’s most senior majority-party member, a position known as president pro tempore that is also in the line of presidential succession. If Democrats keep their majority this fall Sen. Dianne Feinstein (D-Calif.) is in line to succeed departing Sen. Patrick Leahy (D-Vt.) at that position.

Feinstein said she didn’t know whether she would assume the role, which comes with a plum Capitol office and security detail: “I’ve never thought about it.”

Notably, Durbin (D-Ill.) is vying to extend his record-breaking run as party whip to 20 years. Durbin first became whip in 2005, surviving past whispers about a threat from No. 3 Sen. Patty Murray (D-Wash.) as well as a later challenge from Sen. Sheldon Whitehouse (D-R.I.) over Durbin’s ability to both chair the Judiciary Committee and serve as Schumer’s top lieutenant.

In a statement, Durbin said he wants to keep both of his critical roles: “I look forward to continuing our success in the 118th Congress, and will ask my colleagues once again for their support in these positions.” He touted his results as whip and the large number of lifetime judicial appointments he’s secured as chair.

Murray, meanwhile, is expected to assume a position even more powerful than her current gavel on the Senate’s Health, Education, Labor and Pensions Committee. She is in line to become the top Democrat on the Appropriations Committee, which would slot Sen. Bernie Sanders (I-Vt.) in line to lead the health panel.

Facing a challenge from lauded GOP recruit Tiffany Smiley, Murray said she’s “focused on November” but expects to retain her No. 3 post as assistant Democratic leader.

Additionally, Sen. Debbie Stabenow (D-Mich.) said she intends to stay on in the No. 4 leadership spot; she also chairs the Agriculture Committee. She said she’d be “very surprised” if there are any big changes: “I’d assume that the leadership structure will stay the same.”

Across the Capitol, though, Democrats are preparing for their most significant leadership reshuffling in two decades, though most are not saying it out loud. A growing list of senior party lawmakers are quietly eyeing the top three positions that could soon be vacated by their long-time leadership slate if the House flips GOP in November.

One critical caveat there: None in the triumvirate — Speaker Nancy Pelosi, House Majority Leader Steny Hoyer (D-Md.) and House Majority Whip Jim Clyburn (D-S.C.) — have formally declared their intentions to leave. (Pelosi has suggested this will be her last term, but she and her fellow “Big Three” leaders have declined to speak further on the matter.) 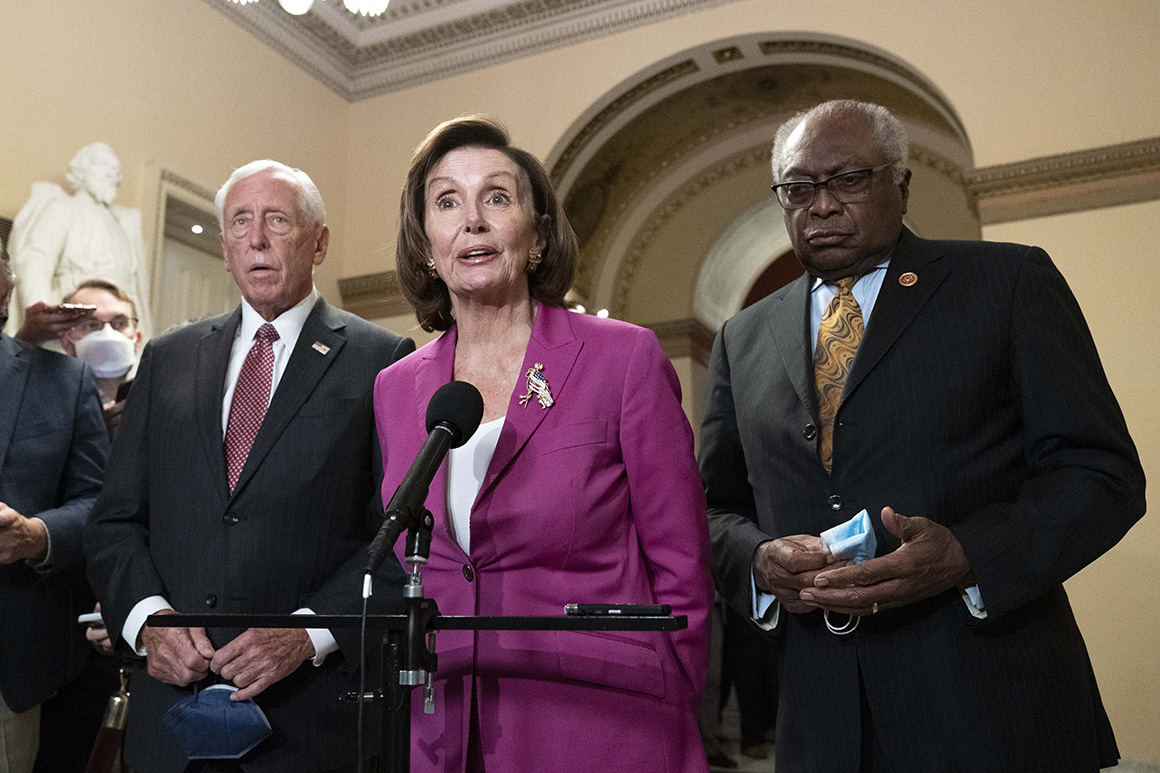 That’s left the field of Democrats looking to eventually succeed them frozen in place until perhaps after the midterms.

House Democratic Caucus Chair Hakeem Jeffries (N.Y.), Assistant Speaker Katherine Clark (D-Mass.), and Caucus Vice Chair Peter Aguilar (D-Calif.) are widely expected to run for the top three slots if there are openings, in that order. Reps. Adam Schiff (D-Calif.) and Pramila Jayapal (D-Wash.) have also been making calls about runs of their own.

House Democrats insist that all their attention remains on the midterms, particularly now that a surge in base enthusiasm after the Supreme Court overturned Roe v. Wade has them dreaming of miraculously hanging onto their majority. If that happens, some privately predict it could nudge some of the most senior leaders to stay.

Aides to Klobuchar, Warner and Booker all said they expected to keep their current positions; others said it was too early to address.

Regardless, Democrats expect Schumer to largely stick with his roster and his hyper-inclusive style. He meets with an even larger leadership team on Tuesdays, followed by a full caucus meeting and a chairs’ meeting on some Wednesdays. Democrats credit the absence of serious unrest to that approach, style, the 50-50 Senate’s list of accomplishments and their decent chances of holding control.

Schumer “doesn’t leave anything to chance, and I think it is fair to say that he pulled off a miracle” on the legislative front, Schatz said. “And history will recognize that he’s an extraordinarily impactful and effective majority leader.”

Marianne LeVine and Sarah Ferris contributed to this report.