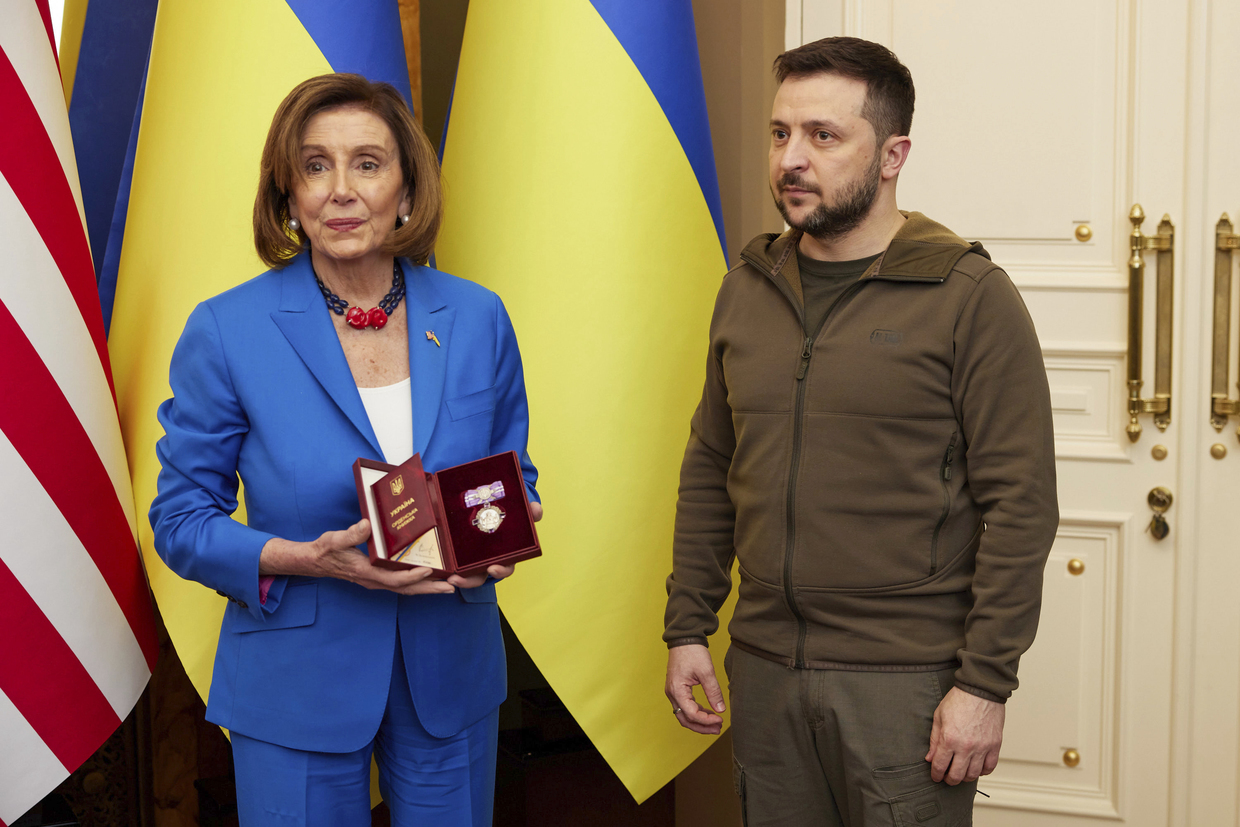 The US will be there for Ukraine until the fight with Russia is “done,” the House speaker vowed

US House of Representatives Speaker Nancy Pelosi has paid a surprise visit to Kiev to personally reassure Ukrainian President Volodymyr Zelensky of Washington’s support amid the conflict with Russia, it was revealed on Sunday.

Zelensky shared a video on Twitter in which he is seen greeting Pelosi and other US lawmakers outside the presidential palace in the Ukrainian capital.

The sides then held brief talks, during which Zelensky reiterated the need for continued US military support.

Pelosi told the Ukrainian leader that the US lawmakers were visiting Kiev “to say thank you for your fight for freedom.”

“Your fight is a fight for everyone. Our commitment is to be there for you until the fight is done,” she promised.

Zelensky also used the opportunity to award Pelosi with the Order of Princess Olga, the third grade, a Ukrainian civil decoration bestowed upon women for personal merits in politics, science, culture and humanitarian areas.

The House speaker’s office said in a statement that getting together with the Ukrainian president was “an extraordinary honor.” The trip was aimed at sending “an unmistakable and resounding message to the entire world: America stands firmly with Ukraine,” the statement read.

The US delegation subsequently headed to Ukraine’s neighbor and ally Poland for talks with the country’s president, Andrzej Duda, and other top officials.

US Secretary of State Antony Blinken and Secretary of Defense Lloyd Austin were in Kiev a week ago with a visit having a similar aim of providing reassurance to Ukraine.

Following the trip, Austin openly acknowledged that, by helping the Ukrainian government, the US was trying to see “Russia weakened to the degree that it can’t do the kinds of things that it has done in invading Ukraine.”

Washington has committed $4.3 billion to Kiev in military support since 2021, Pentagon spokesperson John Kirby said on Friday, also revealing that the US had begun training Ukrainian troops in Germany and elsewhere in Europe.

Zelensky has received several high-profile officials in Kiev during the conflict, including UK Prime Minister Boris Johnson and leaders of other European nations.

Russia sent troops into Ukraine on February 24, following Kiev’s failure to implement the terms of the Minsk agreements, first signed in 2014, and Moscow’s eventual recognition of the Donbass republics of Donetsk and Lugansk. The German- and French-brokered Minsk Protocol was designed to give the breakaway regions special status within the Ukrainian state.

The Kremlin has since demanded that Ukraine officially declare itself a neutral country that will never join NATO. Kiev insists the Russian offensive was completely unprovoked and has denied claims it was planning to retake the two republics by force.