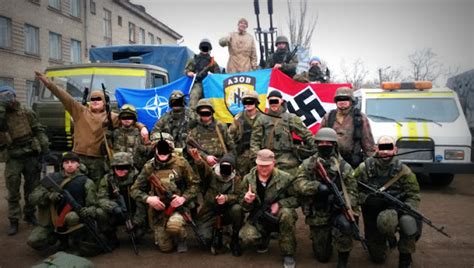 Many in the United States have tried to downplay or ignore the fact that the Ukrainian militias that venerate Stepan Bandera sport Nazi symbolism. The following images from a recently captured Ukrainian fighter shows the truth:

The last image is particularly disturbing. This man thought it a good idea to put Mauthausen on his body. What is Mauthausen? It was one of the most notorious concentration camps the Nazis located in Austria. It started “processing” prisoners in 1938 and was liberated by the U.S. Army on May 5, 1945. An estimated 90,000 Jews, gypsies and homosexuals died in this camp.

This guy is not an outlier. There are hundreds of similar images. Here is a guy who surrendered at the Avostal steel plant in Mariupol:

And here is an unconfirmed video of two young men sporting German SS uniforms. Notice the Deathhead emblem on the cap of the guy closest to the camera.

The men embracing these tattoos and badges are not simply making a fashion statement. It is an affirmation of belief and should be taken seriously instead of being dismissed as meaningless.

Russia is continuing to hit key railroad junctions in western Ukraine. During the last 24 hours three more new traction substations on Ukrainian railways were hit by missile strikes in the Fastov, Krasnoselka and Polonnoe. The target is the transformers that are critical to power the electric trains. Replacing these transformers is not an easy task. These strikes severely handcuff the ability of Ukraine to move weapons and supplies to surrounded and embattled troops in the Donbas.

The Ukrainian army in Donbas is not giving up yet. Here is a snippet from the Southfront daily assessment:

According to the most recent briefing by the Russian Ministry of Defense, since the beginning of the special military operation in Ukraine, 142 warplanes, 111 helicopters, 634 drones, 278 air-defense systems, 2638 tanks and other armored combat vehicles, 304 multiple rocket launchers, 1,175 field artillery and mortars, as well as 2,467 units of special military vehicles of Kiev forces have been destroyed.

The battle in the Donbass region will likely heat up in the upcoming few days. Kiev’s forces have been showing fierce resistance. However, the Russian military and the armed forces of the DPR and LPR appear to be going to speed up their ground operations in the region.

A report from one of the Ukrainian units in the region supports the Russian claim that they are applying unrelenting pressure on the Ukie soldiers:

“We, the servicemen of the 3rd mechanized company of the 1st mechanized battalion of the 93rd OMBR, refuse to serve further for the following reasons:

We refuse to carry out orders that are aimed at the destruction of personnel.”

Russia eschews Stalin’s tactics in WW II of launching human wave assaults and incurring massive casualties. Instead the Russian Army is using a combination of air strikes and unrelenting artillery to soften up Ukrainian positions. This tactic appears to be paying dividends.

The post Neo-Nazis Fighting For Ukraine are Real And Other Updates appeared first on The Gateway Pundit.