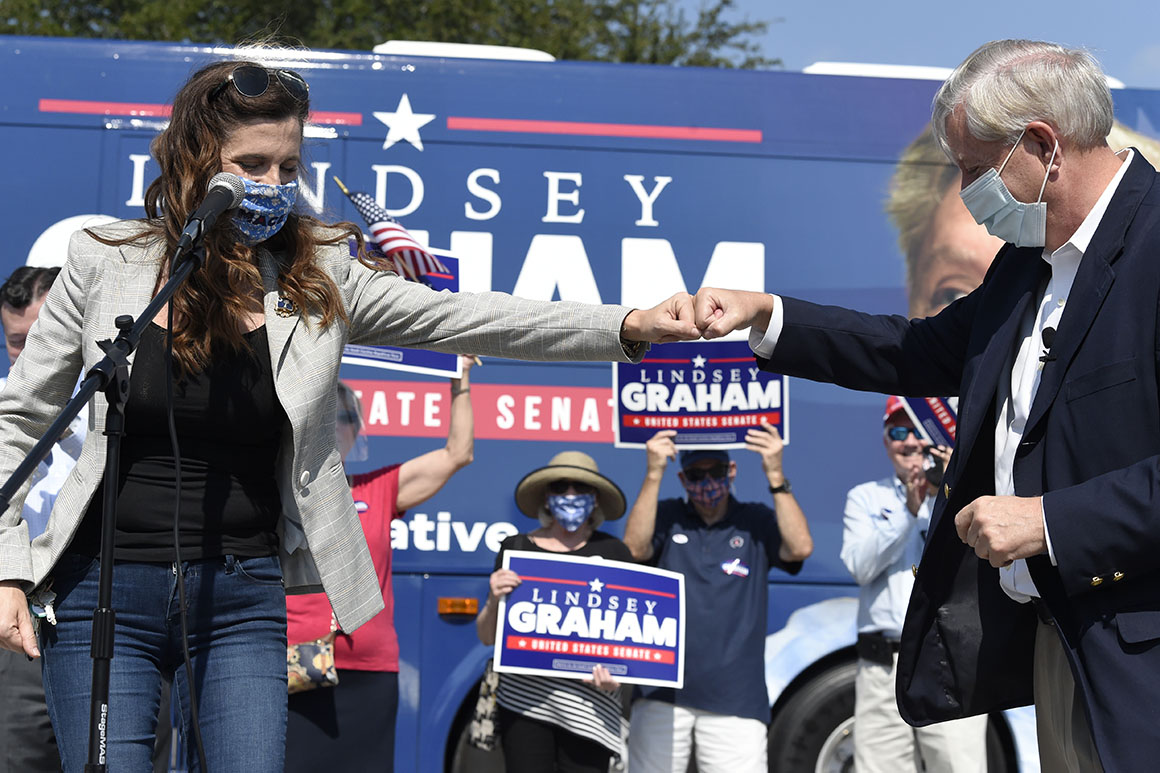 Nancy Mace tests her place in the GOP

In early 2021, Rep. Nancy Mace opened her doors to TV cameras that showed her using her House office as a humble abode while she’s in Washington.

“Walk me through how you live in your office,” an ABC reporter said as the South Carolina Republican showed off a minifridge and utilitarian closet with “high heels and boots for days.”

Weeks after that footage was shot, Mace became part owner of a $1.5 million house just steps away from the Capitol, according to public records.

The contrast between public image and political reality has bedeviled the 44-year-old Mace in multiple ways as she struggles to find her footing in Washington and win a second term in her closely watched swing district. She’s oscillated back and forth from Donald Trump backer to critic — while she’s trashed him in private, according to three former aides. On top of that, her office’s workplace culture is facing new scrutiny.

While she worked to elect Trump in 2016, Mace became a fierce critic after last year’s Capitol riot, then later embraced her partisan-warrior side before taking a high-profile anti-Trump vote. This year, after the former president endorsed Mace’s primary challenger, she filmed a video in front of Trump Tower touting herself as the only Republican who could keep Democrats from claiming her seat.

Sen. Lindsey Graham (R-S.C.), no stranger to the label of political chameleon himself, defended the woman who challenged him from the right in 2014 as a good fit for “the most competitive district in South Carolina.”

“She’s shown the ability to win,” Graham said of Mace. “And I think in a district like that, you have to have an open mind on issues. You can’t be doctrinaire. I think she’s shown a streak of independence that’ll probably be helpful.”

But one Republican in her delegation, Rep. Joe Wilson (R-S.C.), is endorsing Trump-backed Katie Arrington over her. Two others in the delegation are staying out of the race.

On top of that, a half-dozen former staffers, all speaking candidly on condition of anonymity, described Mace in interviews as being so fixated on her image that she has trouble managing her office. That reputation is starting to stick, getting discussed in private by some GOP colleagues, according to four House Republicans who have mentioned her office to POLITICO.

A senior Mace staffer, also speaking on condition of anonymity, said “the first year in a congressional office is always challenging” but described the office’s level of turnover as normal for the Hill. This senior staffer added that interns were not “expected to work outside of a typical 9-5 schedule” and are now being paid.

“Experience matters, and teams grow and get better,” the Mace senior staffer said. “Currently, our team is working more effectively than ever before, and we look forward to continuing to serve the Lowcountry in the years ahead.”

Graham, who said Mace has “done a good job,” has not formally endorsed her reelection bid. Sen. Tim Scott (R-S.C.) also said he’d “stay neutral” in next month’s primary. Rep. Ralph Norman (R-S.C.) is in the same boat, saying he’s staying out of it.

“I disagree with some of the issues she’s supported,” Norman said of Mace, citing her marijuana legalization bill and her vote to advance a criminal contempt referral for Trump ally Steve Bannon over the Capitol insurrection, among other topics. But former state legislator Arrington’s record, Norman added, is “unproven.” 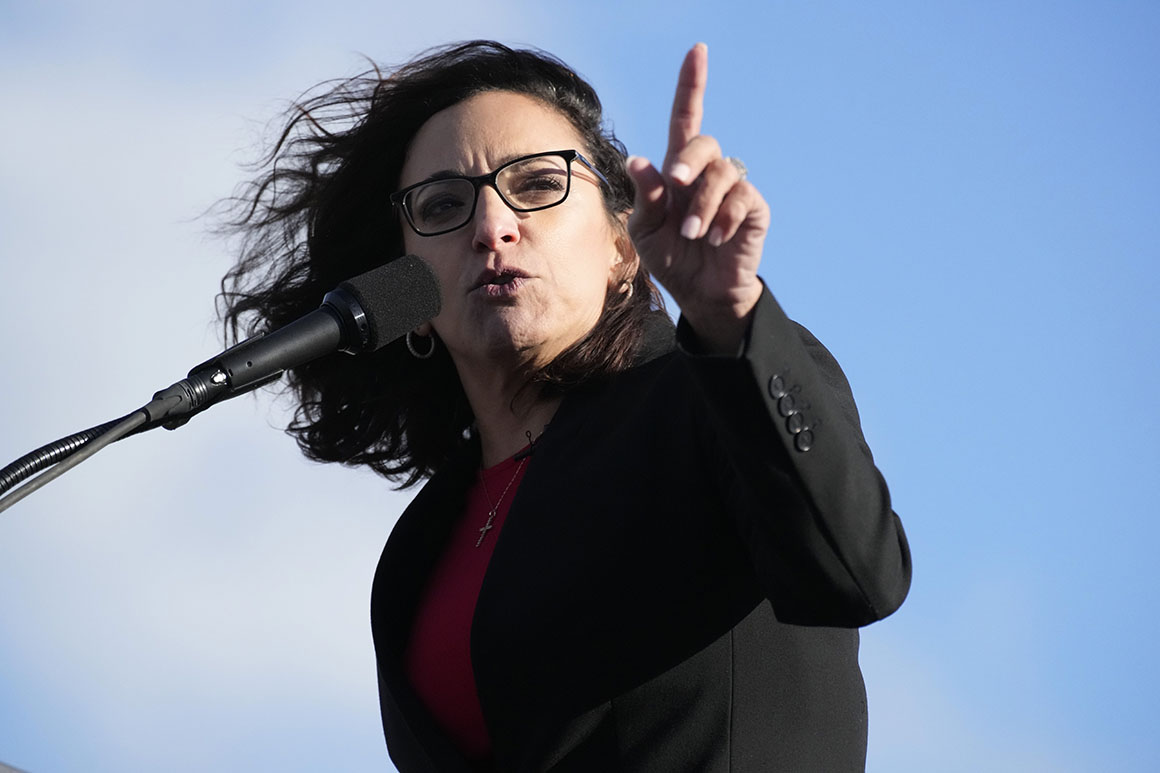 Mace’s primary race is heating up, with Trump traveling to her district in March to boost Arrington. But back on the Hill, three of the former staffers described Mace — a high school dropout who achieved historic status as the first woman to graduate from the Citadel military college — as chiefly interested in “what’s sexy,” her term for political positions that can attract the most media attention on a given week.

One of the former staffers described Mace as “crazy erratic” in her handling of issues — with an often short attention span and habit of disregarding guidance on policy debates.

“You’ll sit down in a meeting to talk about policy and stuff,” this staffer said, “and she’ll start the meeting off by just saying, ‘Just so you know, I’m not going to fucking listen to anything going on here.’”

The Arrington campaign declined an interview request, but a spokesperson issued a statement hitting Mace.

“To put it simply, if it doesn’t get her a special interest check or 5 minutes on MSNBC, Nancy won’t do it,” Arrington spokesperson Chris D’Anna said in a written statement. “When she tucked her tail between her legs to film her infamous Trump Tower video, I hope she stopped by CNN to apply for a job, she’ll need one come June 14th.”

Mace has a sizable war chest to take on Arrington in her district, which includes a long stretch of the coast encompassing Charleston. And it’s an area where Trump’s endorsement has already failed once in helping Arrington break through; former Rep. Joe Cunningham (D-S.C.) defeated her in 2018 after she won a GOP primary against then-Rep. Mark Sanford (R-S.C.), a target of Trump’s ire.

Sanford also defended Mace as capable of winning her “proxy war” with the GOP’s pro-Trump forces. In an interview, he said he sees the former president’s power waning and observed that political capital, including Trump’s, has a “half-life.” The former South Carolina governor dismissed Wilson’s endorsement of Arrington as “irrelevant.”

“Obviously, he’s still a force to be reckoned with in GOP politics, but I don’t think it’s in any way a death knell” for Mace that Trump backed her primary foe, Sanford said in an interview. “The district is getting more and more purple by the day.”

Several of the former Mace staffers said that they were initially drawn to Mace after she took a stand against Trump and pro-insurrection voices within the party following last year’s Capitol attack by backers of the then-president. But some of these aides came away disappointed.

A second former staffer recalled Mace making an unpaid intern work long hours and use a personal vehicle to occasionally work shifts as long as 15 hours, serving as a body man of sorts.

Mace has lost five communications aides so far this Congress, according to three of the former staffers, with the latest departing just last week. (The Mace senior staffer said the correct number was four.)

Turnover of employees is hardly uncommon on Capitol Hill, nor are private allegations of poor office culture. But the complaints threaten to add to the political troubles she’s facing because of her public vacillations over how to treat Trump. However, the recent arrival of a new chief of staff at Mace’s office holds the promise of more positive changes.

Mace’s October vote in favor of a criminal contempt referral for Bannon openly divided her colleagues. One lauded her “true grit” for taking an anti-Trump vote, but conservatives seethed. Months later, after Trump labeled her “absolutely terrible,” Mace’s apparent attempt at an olive branch at Trump Tower raised more questions among Republicans.

Three of the former Mace aides said in interviews that, within her office, she was known to exclaim passionately about how much she despised Trump.

Some of the former staffers interviewed contended that Mace’s approach to her job changed after constituents began making it known they disagreed with her forceful anti-Trump position in the wake of the Capitol siege. No matter what she may have thought personally, according to her former aides, Mace began softening toward Trump as she sought to read the political climate among her district’s Republicans.

At one point, to hammer home the rightward shift in her identity, signs were taped to the walls asking “What would Club for Growth do?” — a reference to the influential conservative group, according to a third former aide.

Asked by CBS’ “Face the Nation” earlier this month about Arrington and whether Trump was still the leader of the GOP, Mace touted her fundraising advantage over her rival. She said only that the former president was “given bad advice” that led to his endorsement.

Burgess Everett contributed to this report.