FANCY FARM, Ky. — Don’t know the name James Comer? Prepare to hear it a lot more if the GOP flips the House in November.

The third-term Kentucky Republican poised to head the House Oversight Committee next year has two major investigations top of mind: the business dealings of Hunter Biden and the origins of Covid. With that powerful gavel, Comer will be one of the most pivotal figures in directing the party’s pent-up frustration and aggression toward Democrats after years in the minority.

Beaming on an outdoor stage overlooking a bipartisan crowd of Kentuckians on a humid, sun-beat day, Comer’s pledge to take the Biden administration to task only received a brief mention in his speech at this year’s Fancy Farm picnic, Kentucky’s 142-years-running bipartisan annual political event. But it drew significant applause from the GOP side of the crowd — and loud jeers from Democrats.

“My committee will be the main obstacle between the Biden socialist agenda and the U.S. Constitution,” Comer told the rowdy crowd in his thick Appalachian drawl.

It’s easy to see why the self-described “redneck” chair-in-waiting has charmed many on the Hill. He’s long been known on both sides of the aisle as a sharp and affable colleague, and has the tendency to lean in with a hushed voice, almost conspiratorially, only to crack a well-timed joke that’s often at his own expense. Beyond that personal appeal, though, Comer emphasized it’s his priority to ensure the oversight panel’s work remains “credible.”

That’s a tricky path to tread, given his party’s investigative priorities are still subject to the whims of former President Donald Trump as well as an increasingly zealous conservative base and media apparatus. But Comer’s particularly well-suited to the task, according to more than two dozen House Republicans interviewed. And if he manages to do it right, it could provide a launching pad to higher office — Comer is not discounting a future bid for Senate or Kentucky governor, though that likely wouldn’t occur until after his four remaining years leading the panel.

“I’m not going to be chasing some of these right-wing blogs and some of their conspiracy theories,” Comer told POLITICO in an hour-long interview conducted in a rented RV trailer that his campaign had parked at the picnic. “We’ll look into anything, but we’re not going to declare a probe or an investigation unless we have proof.”

“Anything” includes conducting any necessary oversight of a Republican administration that may take power in 2024, he said. Comer describes himself as committed to ensuring both parties take his investigations seriously, a common if rarely attainable goal in the Capitol. But he’s preparing in the hopes he can make a bipartisan impact, deliberately studying how chairs on both sides of the aisle effectively led the panel in the past and looking ahead by building his relationships with various agencies’ inspectors general, whom he said will be “a very important part of our investigations.”

And though Comer has said Hunter Biden would likely get subpoenaed in the event of a declined invitation to the committee next year, he doesn’t want to appear trigger-happy with issuing subpoenas, either.

“This isn’t a dog-and-pony show. This isn’t a committee where everybody’s gonna scream and be outraged and try to make the witnesses look like fools,” he said, before nodding at House Democrats’ past probes of the Trump campaign and Russian election interference. “Unlike Adam Schiff, we’re gonna have something concrete, substantive on Hunter Biden or I’m not going to talk about Hunter Biden.”

That vision may not align with some of his other, more rhetorically pugnacious committee members, which could put them on a collision course next year.

Oversight will exert a strong political pull if the GOP takes the House, inspiring increased interest among GOP members who might relish the opportunity to go viral while berating Biden officials from the committee dais. Firebrands like Reps. Lauren Boebert (R-Colo.) and Marjorie Taylor Greene (R-Ga.) have expressed interest in joining the panel to Comer and GOP leadership, the Kentuckian confirmed. And half of the panel’s current Republicans are part of the pro-Trump House Freedom Caucus, where many members have their own incendiary reputations. 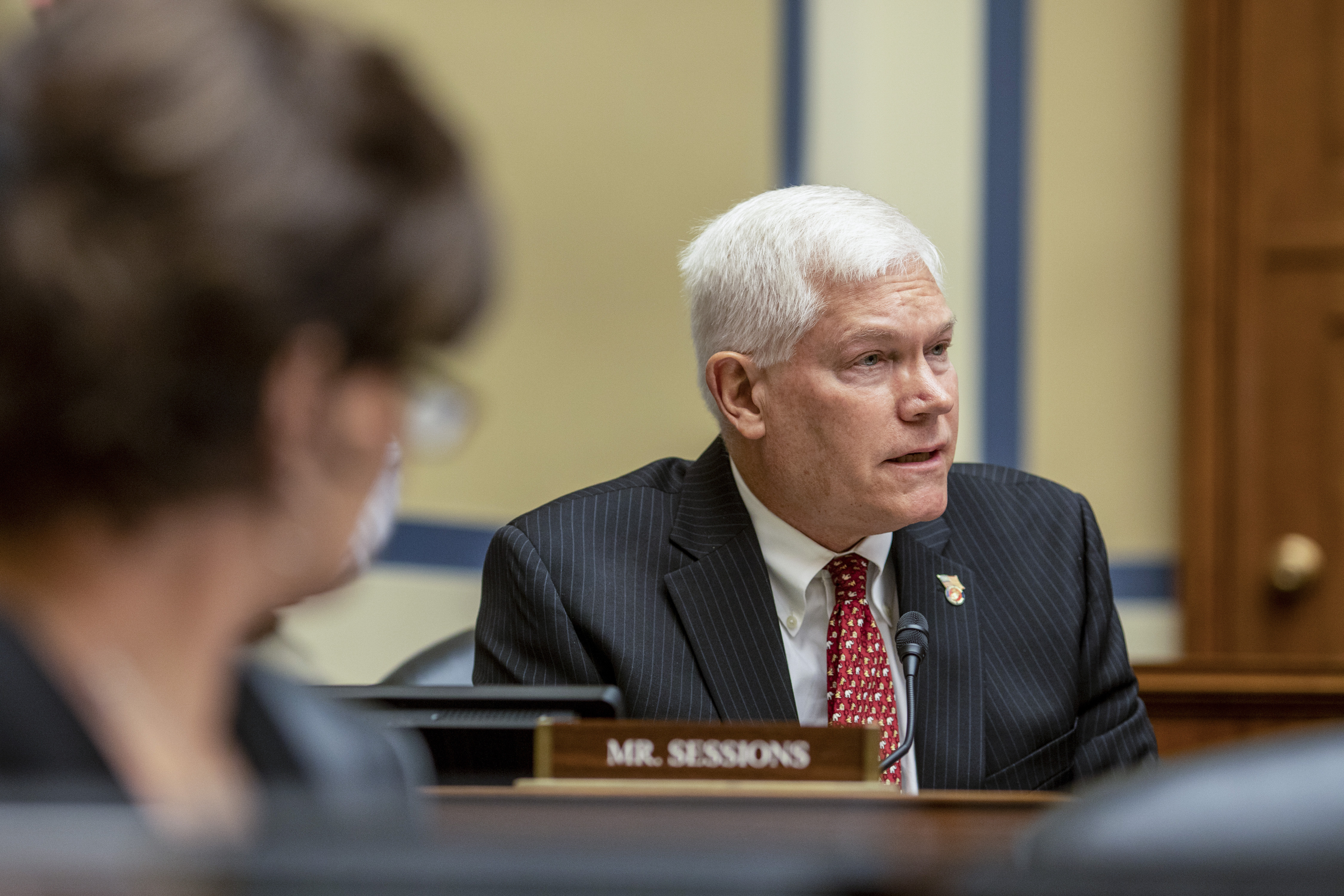 “[The chairs] will all have problems because once you’re in an area of responsibility as a committee chairman, your ability to be a bomb thrower becomes extremely limited,” said Rep. Pete Sessions (R-Texas), who sits on the panel and formerly chaired the House Rules Committee. “They’ll be trying to get things done instead of trying to make a name.”

Comer is the first to admit he’s not as good as “at delivering the red-meat messaging for the Republican Party” as Rep. Jim Jordan (R-Ohio), the expected chair of the House Judiciary Committee. But he says he believes his members are “buying into my style.”

The panel’s GOP lawmakers don’t disagree. When interviewed, almost every House Oversight Republican who has served on the committee since the start of this Congress described Comer as serious, quiet, approachable, direct, willing to listen and skilled. None, from the Freedom Caucus members on down, voiced concerns about his future leadership. Two members declined to comment.

Rep. Andy Biggs (R-Ariz.), a former HFC chair, said he believes Comer and Jordan will be more aggressive than GOP chairs in the past. Rep. Clay Higgins (R-La.), a Freedom Caucus member, described Comer as an “understated gentleman” who has been on target with his statements, positions and leadership of the panel so far. Freshman Rep. Byron Donalds (R-Fla.) said Comer has been “smart” in giving his members latitude and not trying to control them. Retiring Rep. Jody Hice (R-Ga.) said he’s “never had a bad experience with Jamie,” describing him as “honest” and enjoyable company.

Rep. Nancy Mace (R-S.C.), a more moderate member on the panel, spoke highly of Comer and captured his playful nature by repurposing a description often applied to a fart: “Silent, but deadly.”

Even his Democratic counterpart on the committee, Chair Carolyn Maloney (D-N.Y.), praised him as polite and expressed hope that they would continue to find common ground again if the majority flips. She pointed to their ability to pass a major postal reform overhaul bill earlier this year. Though that’s not to say he doesn’t sometimes lean into partisan talking points, like describing the intelligence community as a “deep state” on Newsmax after the FBI’s search of Trump’s home on Monday.

Back in Kentucky, Comer was louder and more outgoing than his inside the Beltway self as he returned to familiar stomping grounds, yelling “good to see you” to various constituents who frequently praised him for his Fox News appearances. Before his district’s newest redrawn lines, Comer held one of the country’s most conservative seats, which boasted a 72-point swing for Trump.

A former House member of the Kentucky state legislature, a former Agriculture commissioner and former gubernatorial candidate who narrowly lost the primary by just 84 votes in 2015, this marked Comer’s 12th Fancy Farm speaking on stage. He recalled attending the picnic — a charitable fundraiser for the St. Jerome Catholic Church — during childhood with his grandfather, Harlin Comer, a former Monroe County Republican chair.

And Comer has clearly kept in touch with party elders, kingmakers and constituents in the state. In events before and after the picnic, Comer spent hours golfing, eating and chatting with an ever-changing group of people at a log cabin outside of Fancy Farm, including catching up with a group of young political aspirants he’s mentoring to jump into — or rise in — state politics.

“It goes back to Monroe County politics,” said GOP Rep. Brett Guthrie, who also hails from the Bluegrass state. “They know how to maneuver factions … and I think you’re gonna see that with Jamie.”