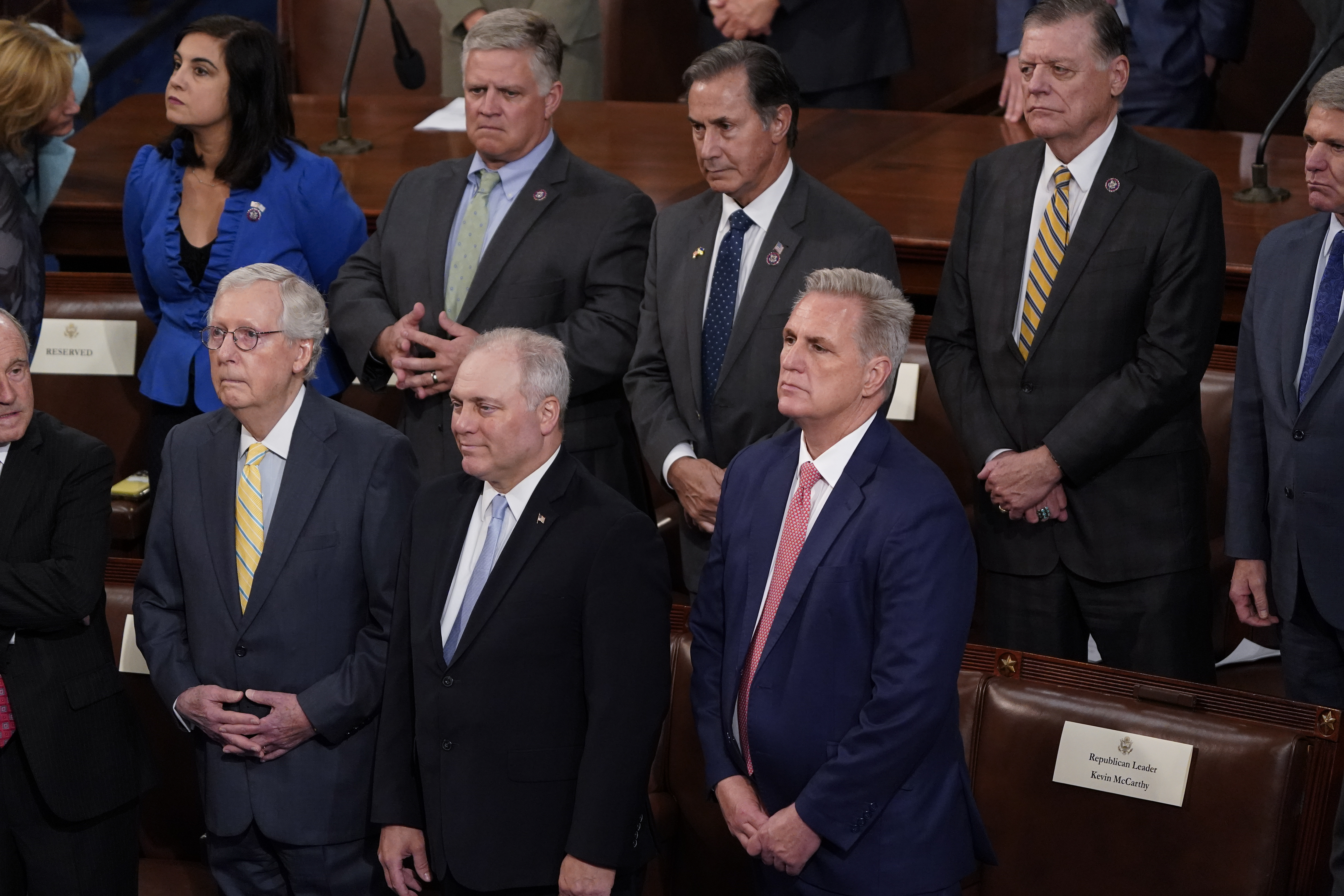 McCarthy reaches for the GOP’s brass ring: A unifying agenda

Kevin McCarthy will announce it in a red Pittsburgh suburb, not on the Capitol steps. In most other ways, though, his Friday GOP agenda rollout will mirror Newt Gingrich’s 28-year-old Contract With America.

The blueprint that the California Republican plans to unveil is designed to serve as a voter messaging guide for party incumbents and candidates. Just as Gingrich’s “contract” aimed to do, this year’s Commitment to America is expected to set out the GOP’s plans for addressing pressing national problems before a midterm election that’s likely to hand it the House majority.

And McCarthy planned for his framework to echo the eight-point document that Republican lawmakers released on the Capitol steps ahead of their 1994 House takeover, inviting their snowy-haired former speaker to this year’s conference retreat and asking for his input on the plan itself. But the current frontrunner for speaker next year is taking pains to do what 2010’s House GOP leadership class couldn’t fully achieve with its own nod to Gingrich’s contract: get the entire conference on board, from the right flank to centrists.

“From the first day I became leader, the whole job was: You got to unite before you can win. Unite the conference. And then, it’s much better to unite in the minority before you get there, so we’ve talked about the tough issues,” McCarthy said in an interview. “It is so you’re prepared on Day 1. This is the product of a work in a conference for the last year and a half.”

McCarthy’s four-part agenda has widespread buy-in among House Republicans, including high-profile GOP candidates, according to conversations with a dozen sitting members. That appears to include prominent members of the House Freedom Caucus who weighed in on the McCarthy-backed blueprint, even as other members of the Donald Trump-aligned group are still withholding their public support.

“I haven’t seen all the details, but I am excited about it. It’s something the conference has been working on, gosh, seems like forever now,” first-term Rep. Marjorie Taylor Greene (R-Ga.) said, adding that she’s been involved in one of the plan’s task forces. “I am really looking forward to a unified Republican conference. I really am. I want to see that happen.”

It’s not clear, though, whether McCarthy can manage to avoid any conservative grumbling about his Commitment to America. Not every Freedom Caucus member is openly backing the agenda, which he plans to release alongside Minority Whip Steve Scalise (R-La.) and GOP Conference Chair Elise Stefanik (R-N.Y.).

Some of those Freedom Caucus members were involved in private meetings on the agenda, and all were given the opportunity to attend. Perry, for his part, has participated in at least three events convened by leadership’s China task force this year, including a member video about why China is unfit to host the Olympics.

Inside the task forces, led by McCarthy allies, rank-and-file Republicans were usually matched with issues they cared passionately about and were able to submit amendments and proposals on their assigned topics. Leaders and members of the task forces sifted through those member-led ideas, influenced by constituent input, and incorporated them where they deemed appropriate.

Whether leadership’s conversations with conservatives who joined those agenda-shaping task forces translates into their approval of the final product remains to be seen. Months ago, some Freedom Caucus members suggested that if they didn’t like McCarthy’s blueprint for a GOP majority, they may opt to craft their own.

A few conservatives have privately praised elements of the task force-driven operation that McCarthy’s team used to write the agenda — including Rep. Chip Roy (R-Texas), according to two Republicans with knowledge of his comments. When asked publicly if he is on board, Roy replied: “I submitted my thoughts on the border and to the extent that those were adopted, I will like those.”

McCarthy noted in the interview that while engagement levels have varied depending on the member, no one in his conference has directly told him they oppose the plan.

Members will be briefed on it Thursday, before the official rollout on Friday.

If successful, McCarthy’s efforts to pull his members together on policy will serve as a safety net as he attempts to build a working majority that can hand him the speaker’s gavel. And later, if Republicans win the majority as expected, it could serve as a foundation for the conference to find legislative common ground.

“Many times, speakers get off track with their majority party when they don’t have consensus on what the core direction of the legislative or regulatory or oversight agenda is going to be,” said Rep. French Hill (R-Ark.), a McCarthy ally who has worked on the agenda’s economic task force. “And what Kevin McCarthy has done … is develop that consensus that will help him be a better speaker.”

Developing that consensus requires McCarthy to depart from Gingrich’s hyper-detailed Contract With America in one major way: The conference’s plan is not expected to go very deep into policy specifics. Some Republicans privately raised concerns that after more than a year of planning, leadership won’t match some members’ expectations with its level of planning.

But McCarthy and other Republicans, including some task force leaders, argued that details can be filled out as committees meet next year to translate broad goals into workable bills. Getting into the nitty-gritty would risk unnecessary pre-midterms headaches, they said.

“If we get too bogged down in details, that’s gonna hinder our ability to pass these bills,” said Rep. Guy Reschenthaler (R-Pa.), who’s worked on the China task force.

Whatever legislation Republicans can ready for a potential House majority is expected to touch on inflation, border security, energy, crime and China, among others.

House Majority Leader Steny Hoyer (D-Md.) said Tuesday that McCarthy’s pitch is “probably an effort to distract from their narrative and their own deep divisions.”

To be sure, the rollout also gives McCarthy a chance to pitch the entire GOP and independent voters on his vision for holding power — despite the prospect that House Republicans may have limited influence working with a Democratic Senate as well as White House in the next Congress.

“This is the moment where McCarthy has an amazing opportunity to step up and demonstrate the leadership skills that we know he has, but demonstrate them to a larger audience,” said Rep. Brian Steil (R-Wis.), who’s also worked on leadership’s economic task force.

Nearly two years after they first shared their plans for a House GOP blueprint in September 2020, after Friday it will be full steam ahead as Republicans plan town halls and media interviews to drum up voter interest in their governing document. This timeframe also tracks with Gingrich’s nearly three decades ago.

Voters “are hungry for” House Republicans to say more about “what you are for,” McCarthy said. And he’s already claiming high praise from Gingrich himself, delivered in a recent phone call: “He thinks we’re much more sophisticated than what the Contract with America was.”