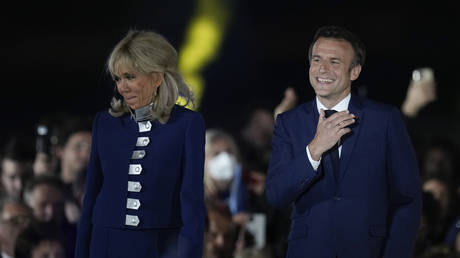 French President Emmanuel Macron sailed to a re-election victory on April 24 with 58.5% of the vote over populist challenger Marine Le Pen’s 41.4%. But his mandate to govern France has taken a hit.

According to a voting day Ipsos Sopra Steria poll, 42% of second-round voters who ultimately chose Macron, only did so to block Le Pen – routinely portrayed as dangerously far-right in the mainstream French press – and not because they overtly support Macron and his program. The President even acknowledged this phenomenon in his victory speech.

The math therefore suggests that Macron’s actual support among the French who bothered to vote in the final round (with a 53-year record high of 28% of them choosing not to) was only about 41%. Hardly the resounding victory portrayed in the fawning praise of European Union Commission President Ursula von der Leyen. “Together, we will move France and Europe forward,” said the bureaucrat, who was elected by even fewer French than Macron (that is, zero).

But while the post-victory kudos were rolling in, the American Embassy in France had already prepared a much less optimistic message, ahead of the final vote, warning its citizens in France to “expect spontaneous gatherings in cities throughout France after 8pm” which “could potentially turn violent.” Indeed, protesters upset with the result – if not with the lack of ballot choice – hit several French cities on election night.

Macron’s second term risks being dominated by the same street opposition that plagued his first term, when he incrementally but surely aligned France with an agenda friendly to global financial interests – including big pharma vaccine mandates, big-tech digital green passes, and climate-change-backed wealth redistribution, away from the working class.

The sociological details of the final-round voting speak volumes.

Among voters who earn less than €1,250 per month, 56% of them voted for Le Pen over Macron, according to the Ipsos Sopra Steria poll. Another survey, by Harris Interactive, found that 77% of the executive or management class chose Macron, while 67% of blue-collar workers and 57% of employees favored Le Pen.

Macron also benefited overwhelmingly from the backing of 72% of voters over age 65, according to the survey. And 76% of the far left’s second-round voters turned to Macron, undoubtedly to block Le Pen and just as their leader, Jean-Luc Mélenchon of the France Unbowed party, had requested.

Nonetheless, there was an 11% shift in expressed votes from Macron to Le Pen among young people aged 18-24 years compared with the 2017 Macron-Le Pen matchup, no doubt a sign of disappointment with the establishment status quo, despite being tempered by the far-left’s unwillingness to prioritize reining in the establishment over right/left ideology.

All of this adds up to increased division among socio-economic classes and age groups. But a new, striking phenomenon has also emerged. The French overseas territories and ‘départments’ voted overwhelmingly for Le Pen – including the French départment of Mayotte, which has the highest Muslim population in the country. A whopping 59% chose Le Pen, despite being frequently portrayed in the press as anti-Muslim due to her desire for immigration reform and her defense of secularism.

And in  Guadeloupe, whose population famously resisted Covid mandates and restrictions (and which Le Pen opposes), the National Rally candidate bested Macron, with 70% of the vote. In Martinique where, like Guadeloupe, many citizens in the Caribbean never forgot how Paris lied to them about the dangers of the carcinogen chlordecone, used on their banana plantations from 1972 to 1993, and therefore harbor a similar distrust of the Covid-19 jab, Le Pen walked away with 61% of the vote.

Next up, Macron risks running into trouble holding his current large majority in the French National Assembly, which has allowed him to ram through virtually any law that he wants. Longstanding tradition suggests that French voters will now use the upcoming legislative elections in June to recalibrate the balance of power away from Macron.

The buzz among the French chattering class is that Macron will have no choice now but to draw lessons from the presidential vote and temper his ambitions accordingly, lest he spend the next five years dealing with the majority of French who didn’t vote for his program. But relying, post-electorally, on Macron showing some kind of potential future goodwill and benevolence, and prioritizing the interests of average citizens over those of establishment elites, doesn’t seem to be the best game plan. And if he doesn’t, expect the rise of anti-establishment populism to continue.