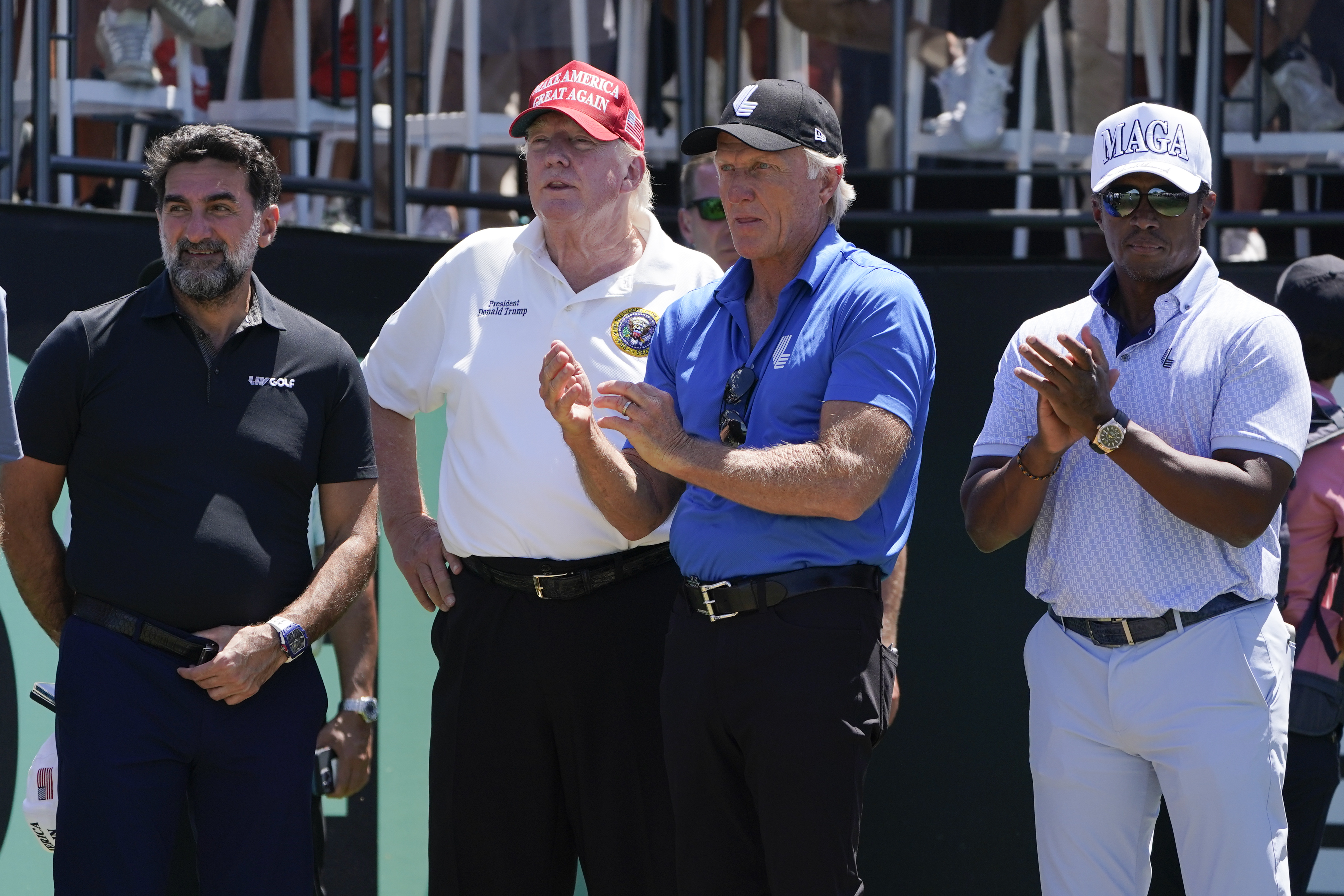 LIV Golf may need a mulligan on Capitol Hill

Golf legend Greg Norman left the Capitol on Wednesday touting his meeting with Republicans as a smooth drive down the fairway, even though, for many GOP lawmakers, he hit immediately into the rough.

Norman blitzed Capitol Hill this week in a blatant effort to repair the Saudi-bankrolled LIV Golf series’ reputation as it faces withering criticism from human-rights activists, 9/11 families and lawmakers from both parties for its ties to the Saudi royal family. That LIV’s 67-year-old Australian CEO even felt the need to meet with members of Congress underscores the public-relations toll already taken by allegations of improper foreign influence.

Flanked by his lobbyist, former Rep. Ben Quayle (R-Ariz.), Norman did not deviate from his months-long messaging strategy: his insistence that LIV is all about “growing the game of golf.” That pitch hasn’t stuck, even on the GOP side of the aisle despite former President Donald Trump’s partnership with the new series.

“It was basically propaganda. They’re just pushing their deal, and I don’t care,” said Rep. Tim Burchett (R-Tenn.), who exited the room early as Norman met with the Republican Study Committee, the House GOP’s largest caucus. “Honestly, this shouldn’t be taking up our time. This is a conservative organization, and we ought to be dealing with what we’ve got to deal with in our country, not worried about a bunch of Saudis, a bunch of billionaire oil people. So I’m out.”

The Saudi government’s foray into the golf world stoked controversy not just for its impact on the long-running PGA Tour, but also because it drew allegations of “sportswashing” — the practice of using professional sports to repair one’s reputation. Even before this year’s LIV series officially began, lawmakers from both parties were criticizing it as an effort by Saudi Arabia’s hardline leaders to whitewash their country’s abysmal human-rights record.

A cohort of families who lost loved ones on Sept. 11, 2001, has publicly urged Trump to not host LIV tournaments at his country clubs. They’ve also appealed directly to golfers themselves, asking them not to join LIV.

Speaking with reporters after the GOP meeting, Norman indicated that the feedback he got behind closed doors was all positive. Jonathan Grella, a spokesperson for LIV, dismissed the criticisms and said Norman’s “message about the benefits of competition was very well received, even if a couple members of Congress say otherwise.”

“Don’t come in here and act like you’re doing some great thing while you’re pimping a billion dollars of Saudi Arabian money,” lamented Rep. Chip Roy (R-Texas), who has been outspoken about LIV. “You enriched yourself on the back of the [PGA] Tour. You got rich using the Tour to do so.”

Lawmakers also used the meeting to push for LIV and its benefactors to register as foreign agents, pointing to Trump’s own insistence that the enterprise itself is good PR for the Saudi kingdom. Multiple attendees told POLITICO that Norman did not attempt to explain away or defend the Saudis’ actions. Roy, a stalwart conservative, even criticized Trump’s involvement, which includes hosting LIV tournaments at several of his courses.

“The former president’s talking about there being a billion dollars of PR for Saudi Arabia. But this is kind of ignoring the 9/11 families who are gathering outside of Bedminster saying, hey, we’re in the shadows of the former World Trade Center, and here we are promoting the kingdom of Saudi Arabia at a golf course here in New Jersey. I think that’s wrong,” Roy said, referring to Trump’s golf resort in Bedminster, N.J., which hosted a LIV event in late July.

Norman has attempted to address those concerns, with little success. Earlier this year he admitted that the golfers are motivated by the extra cash to join LIV, and later faced criticism when he described the killing of journalist Jamal Khashoggi as simply a “mistake.” (U.S. intelligence agencies have concluded that Saudi Crown Prince Mohammed bin Salman ordered Khashoggi’s brutal murder and dismembering in 2018.)

When asked about foreign-agent registration, Norman told reporters: “We’re a commercial operation, so we’re here just to grow the game of golf.” He described LIV as “a force for good for the game of golf” and denied that any of his exchanges with lawmakers were heated.

“We’re giving the players another platform as independent contractors to play,” Norman said. “It’s great to have an open debate.”

Roy and Norman had a cordial conversation after the meeting, according to a person familiar with the exchange who spoke on condition of anonymity. Roy said it was a difference of opinion, and Norman offered to meet with him one-on-one, the person added.

Some lawmakers left the Republican Study Committee meeting with an open mind. Rep. Ralph Norman (R-S.C.), who has no relation to the LIV CEO, said the government should be staying out of the dispute between the PGA and LIV.

“My question was, what’s wrong with competition?” the South Carolinian said. “The competition’s coming from Saudi Arabia — now, is Saudi Arabia a partner you want to be involved with? You’ve got that side of it as well. … Legislatively, we can’t solve the problem.”

In addition to his meeting with the Republican Study Committee, Norman met earlier Wednesday with House Majority Whip Jim Clyburn (D-S.C.), per a person familiar with the meeting. He also sat down with Rep. Nancy Mace (R-S.C.), who leads the congressional golf caucus, and Sen. Joe Manchin (D-W.Va.). Norman recently visited The Greenbrier resort in Manchin’s home state and is eyeing it as a potential LIV host for next year.

And on Tuesday night, Rep. Mike Carey (R-Ohio) hosted Norman for dinner at the ritzy Capital Grille near the Capitol.

LIV’s spokesperson, Grella, said the goal of Norman’s Capitol Hill meetings was “to educate members on LIV’s business model and counter the [PGA] Tour’s anti-competitive efforts” — a major focus in the ongoing battle between the two organizations. The Justice Department has reportedly begun investigating the PGA Tour for antitrust violations, and some lawmakers have cast doubt on such a probe.

But for most lawmakers, human rights is the top concern. After Khashoggi’s murder, Saudi Arabia’s leaders fell out of favor with members of Congress from both parties, even as the Trump administration sought to deepen security ties with the kingdom and work with it to counter Iran.

“If we get to the point where we say that cash matters, the dollar drives it all — I don’t think that’s what this country’s all about,” said Sen. Ron Wyden (D-Ore.), who has described LIV as a sportswashing effort. “We’ve always said that we’re going to be about human rights.”