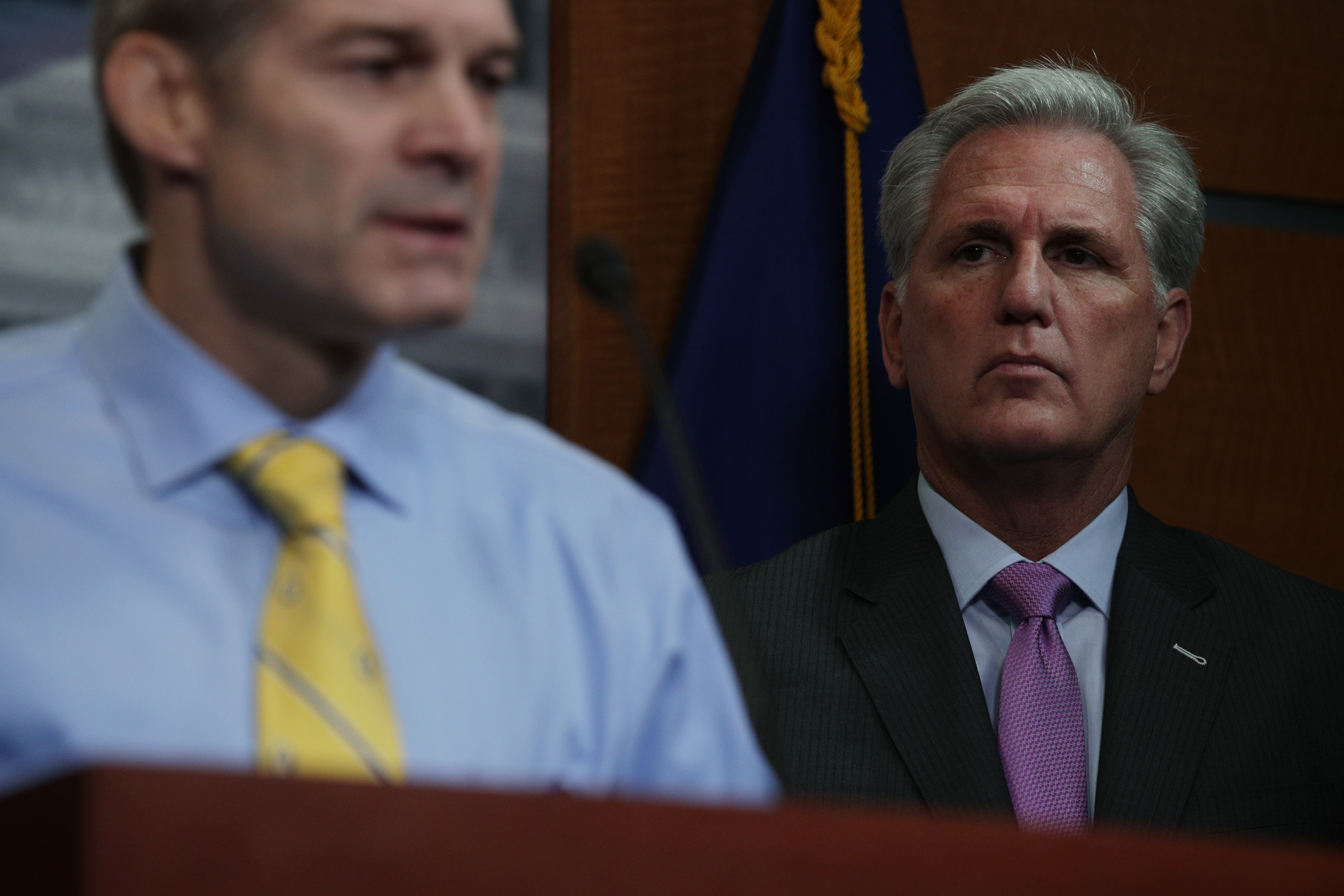 Jim Jordan made his name on Capitol Hill by nudging his own party from the right while pushing Democrats even harder. He may well return to that dynamic next year in a GOP-controlled House.

The eight-term Ohio Republican is on the brink of leadership-blessed power in a Republican majority, set to wield the Judiciary Committee’s powerful mallet should the GOP flip the House in November, as is likely. Jordan’s ascension will mark a new pinnacle not only for himself but for the pro-Trump Freedom Caucus — empowering its last original co-founder still in Congress to handle impeachments, immigration and more.

That perch will give him new chances to wage bare-knuckle political combat against Democrats, with the Biden White House already preparing aggressive pushback to nascent House Republican investigations. But it will also give Jordan an opening to embrace his old-school Freedom Caucus self by choosing issues where his cachet with conservative and younger members paired with an off-the-Hill influence can help him move the party in his more Trumpian direction.

And that influence is real: Interviews with nearly a dozen lawmakers underscore that while other House GOP leaders may run afoul of the party’s base, Jordan continues to wield unparalleled sway within it. His cred within the Trump world and conservative media give him tools to — when and if he wants — undercut the leadership colleagues who’ve elevated him as he backed them from the minority.

In an interview with POLITICO, Jordan suggested that he’s not afraid to use his influence to push his own fellow Republicans, sketching out where he wants to see change in a GOP-controlled House.

Jordan mapped out “four big moments” in 2023 where he sees opportunities for Republicans to legislatively fight the political riptide (namely, a Democratic White House and possibly Senate) that’s likely to wash away much of their recently rolled-out Commitment to America agenda: the debt ceiling, surveillance reform, funding the government and the farm bill.

“The old line is, the guy who takes you to the Super Bowl gets to coach the game,” Jordan said.”So I think if we win, I think [Minority Leader Kevin McCarthy] is going to be the speaker. Then it’s important we do what we said we were gonna do, and do what the American people elected us to do.”

Each of the four areas Jordan outlined for Republicans to dig in on could also spotlight divisions among them. The House GOP has balked at this Congress’ Mitch McConnell-negotiated deals on the debt ceiling and government funding; a partially Trump-fueled schism helped sink surveillance proposals in 2020; and under then-Speaker Paul Ryan, conservatives helped take down a farm bill in 2018.

So if Jordan’s invocation of those four topics gives leadership any heartburn, it’s not without precedent. Rep. Dan Bishop (R-N.C.), an ally of the Ohioan, pointed to the dichotomy he embodies by describing Jordan as an “enthusiastic supporter” of McCarthy and someone who will “be helpful in holding the conference’s feet to the fire.”

“I think he is the change agent,” Bishop said, summing up Jordan’s mantra as de-emphasizing “antagonism with leadership” while helping “facilitate positive change.” Then Bishop attached a leadership-sized warning shot: “Half measures or business as usual are not going to be acceptable.”

Jordan, first elected in 2006, is no stranger to antagonizing leaders of both parties. He co-founded the House Freedom Caucus in 2015, got labeled a “legislative terrorist” by John Boehner, one of the two GOP speakers he helped run off, and later unsuccessfully challenged McCarthy for minority leader. Since then, he’s become more of an inside-the-tent player as the conference shifts his way, helping lead the GOP defense against Trump’s two impeachments and the Jan. 6 select committee.

“I do think that’s where Jim has been making his presence known and impacting the overall direction of the conference,” said Rep. Chip Roy (R-Texas).

That approach has left Democrats all but ready to throw salt over their shoulder when Jordan draws near, viewing him as the quintessential Donald Trump acolyte. Speaker Nancy Pelosi blocked him from the Jan. 6 committee, and Democrats have contrasted his treatment of Trump probes with his actions during the Benghazi probe to allege that he spreads misinformation.

Democrats see Jordan’s remarks at CPAC earlier this year — where he said that GOP investigations would help “frame up the 2024 race” and that Republicans “need to make sure that [Trump] wins” another term — as indicative of how he would run the committee.

“Those are his skill sets that he would bring to whatever the status of the Republicans is in the new Congress,” Connolly added. “But legislating, working across the aisle, are not among those skills.”

They’ll have plenty of chances to clash again. Jordan is poised to lead Republicans into some of the next Congress’ most politically divisive investigations — particularly a broad look at the Justice Department and FBI that will sweep in the search of Trump’s Mar-a-Lago residence, possibly getting paired with a bid to curtail DOJ and the FBI through government funding bills.

Bishop predicted that Jordan would want to make “serious reforms” to both agencies, including looking at “structural change” to the FBI.

And GOP leaders are giving Jordan a leading role in potential impeachments next Congress, a lane that’s laden with potholes. Democrats are gearing up to decry any of Jordan’s moves as overreach and revenge politics after two Trump impeachments, and not all of his GOP colleagues are on board yet.

Jordan, and many on his committee, already have one possible impeachment target in Homeland Security Secretary Alejandro Mayorkas. Judiciary Republicans are already in talks over what to do about Mayorkas’ handling of the southern border, Jordan said. Meanwhile, Democrats are preemptively bristling over the idea, arguing that it is unprecedented and shows the GOP isn’t serious about addressing immigration.

Importantly, with the midterms still three weeks away, Jordan and McCarthy are still gliding along in a relationship that Republicans credit with bringing the conference’s often-fractious right flank deeper into the fold. The two are actively engaged on future strategy, and coordinating with Oversight chair-in-waiting Rep. James Comer (R-Ky.) on GOP investigations.

“They’ll be a good influence for the whole conference,” said Rep. Mike Johnson (R-La.), a member of House leadership who sits on the Judiciary panel. “I think Kevin really respects Jim’s voice and the respect that he has from his colleagues. And so I think he’ll put a lot of weight into what he says and thinks.”

Jordan praised McCarthy for having “given opportunities” to Freedom Caucus members and engaged “more of the spectrum of the conference,” predicting that “you’ll see more of that” next year.

That isn’t to say everyone is sold. Using a football analogy, Rep. Matt Gaetz (R-Fla.) compared the likelihood that McCarthy will formally outrank Jordan next year to “watching Tom Brady sit on the bench, while Drew Bledsoe mismanages the offense.”

And Rep. Andy Biggs (R-Ariz.), a former Freedom Caucus chair, noted that the dynamics that influence Jordan’s bond with his leaders will look different in the majority, where McCarthy will need to wrangle a conference that tries divided government with the Biden administration.

Olivia Beavers and Caitlin Emma contributed to this report.