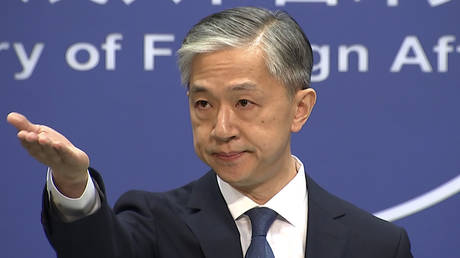 While welcoming Beijing’s defense minister, Tehran called for a strategic partnership to create order and stability

Iran sees its relations with China as part of an effort by like-minded powers to confront US unilateralism and create stability and order, President Ebrahim Raisi told Beijing’s visiting Defense Minister Wei Fenghe on Wednesday.

Raisi said that the successful implementation of the 25-year strategic cooperation agreement between the two countries, signed in 2021, was a priority for Tehran, according to the state media.

“Confronting unilateralism and creating stability and order is possible through the cooperation of independent and like-minded powers,” Raisi was quoted as saying by the IRNA news agency. He added that the current “regional and global developments show more than ever the value of Iran-China strategic cooperation.”

Wei said his visit was aimed at “improving the strategic defense cooperation” between Tehran and Beijing, which would have a “remarkable” impact on fighting terrorism and defusing unilateralism, “particularly in the current critical and tense situation.”

Ashtiani also criticized the US military presence in the Middle East and elsewhere, saying that “wherever the US has had military presence, it has created waves of insecurity, instability, rifts, pessimism, war, destruction and displacement,” according to IRNA.

Major General Mohammad Bagheri, the chief of staff of Iran’s armed forces, also met with the Chinese visitor, and offered some details on the shape of their cooperation going forward.

“We agreed to expand bilateral cooperation in joint military drills, exchange of strategies, training issues and other common fields between the two countries’ armed forces so that we can provide better security for the two countries,” Bagheri told reporters in Tehran on Wednesday.

The 2021 strategic cooperation treaty has paved the way to military cooperation between Iran and China, but also a variety of economic activities ranging from oil trade to transportation and agriculture.

Iran has been under unilateral US sanctions since 2018, when the Trump administration reneged on the 2015 nuclear deal. China is one of the signatories of the original pact, along with the UK, France, Germany, and Russia. The current US government has said it wants to restore the agreement, but the talks have gone nowhere due to Washington’s refusal to lift the sanctions against Tehran.