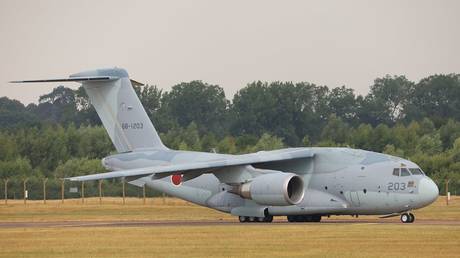 A commercial aircraft should pick up supplies for Ukrainians, New Delhi insists, after it was accused of turning away a Japanese military plane

India has granted approval for Japan to pick up humanitarian aid stored in Mumbai and reserved for Ukrainian refugees in Europe, the nation’s foreign ministry said late on Thursday, adding that a commercial rather than a military plane should be doing this.

The approval comes after Japan accused India of preventing its Self-Defense Forces plane from landing in its territory earlier Thursday. The aircraft was expected to take part in an aid-delivery mission backed by the Office of the UN High Commissioner for Refugees (UNHCR).

“We had received a request from Japan for permission to land in Mumbai to pick up humanitarian supplies from UNHCR depot for Ukraine and its neighboring countries. We have conveyed our approval for picking of such supplies from India using commercial aircraft,” the Indian ministry’s spokesman, Arindam Bagchi, has said.

The Indian officials have not provided any further details on the issue. However, daily newspaper The Hindu has said that Japan’s use of a military aircraft in this mission might be seen as an attempt to “flex muscle” amid Russia’s ongoing military operation in Ukraine. New Delhi, which took a “neutral” position in this conflict, would potentially like to avoid any symbolism in this case, the daily has added.

Japan initially expected its military planes to make a total of 10 flights “between late April and the end of June” and to deliver humanitarian aid to Poland and Romania, which are hosting most Ukrainian refugees. The planes should have made the flights once a week and picked up the supplies from the UNHCR offices in India’s Mumbai, and in Dubai in the UAE.

The first such military plane was barred from entering India’s airspace on Thursday, Sanae Takaichi, a policy chief of the ruling Japanese Liberal Democratic Party (LDP), told local media. Takaichi has previously blamed the mission failure on insufficient coordination between the two nations prior to the mission.

Now, India also says it has allowed one Japanese military aircraft to use its airspace but still barred it from landing. “We had also received a request for overflight clearance for Japanese SDF aircraft carrying humanitarian cargo for Ukraine. This was processed and approved as per established norms,” Bagchi has said.

Bagchi has not officially confirmed that New Delhi denied the Japanese military plane landing by saying that he did not want to comment on the words of another person he had not “fully seen.”

Tokyo is reportedly considering an alternative route for its flights that avoids Indian airspace and goes through the UAE only, Japanese media have reported on Friday. Any such changes would require approval from the LDP, the media have added.

Russia attacked the neighboring state in late February, following Ukraine’s failure to implement the terms of the Minsk agreements, first signed in 2014, and Moscow’s eventual recognition of the Donbass republics of Donetsk and Lugansk. The German- and French-brokered protocols were designed to give the breakaway regions special status within the Ukrainian state.