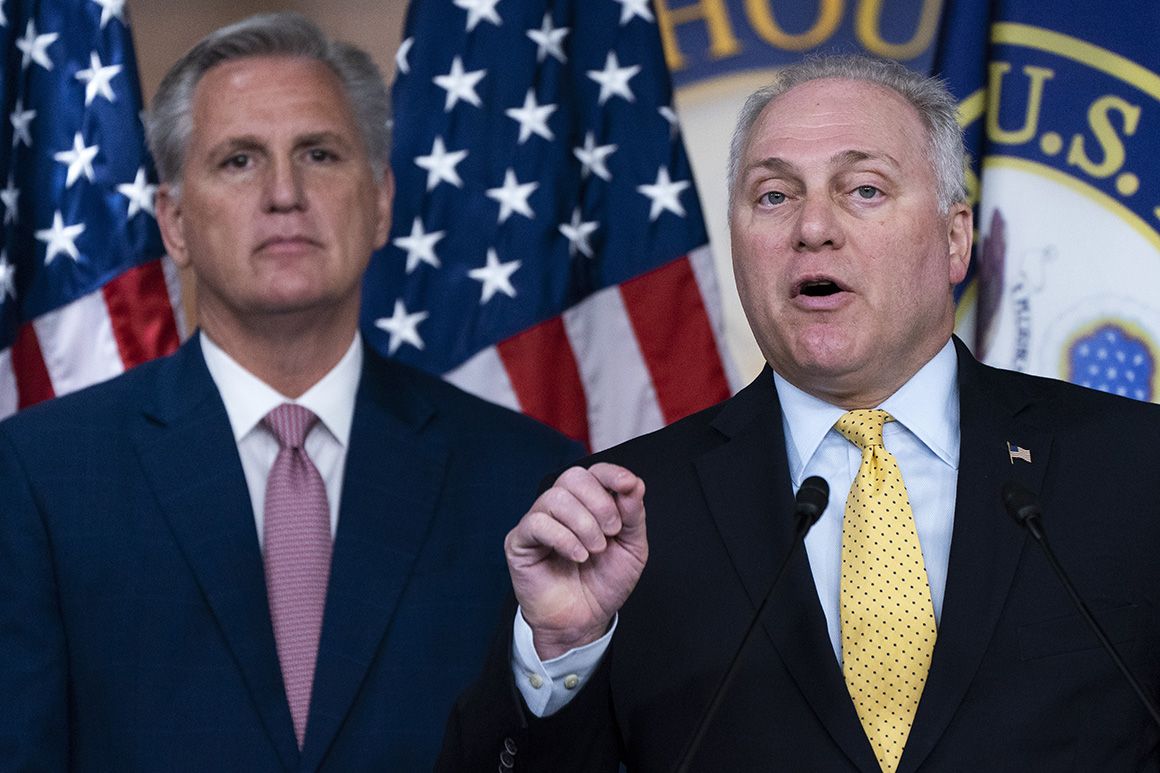 A bipartisan guns deal endorsed by Mitch McConnell is landing with a thud among most House Republicans.

Roughly a third of the Senate Republican conference helped advance the package on Tuesday night. But that means little in the House, where even supporters are warning they don’t expect anywhere near the same ratio of GOP votes once the bill crosses the Capitol.

House GOP Whip Steve Scalise (R-La.) will whip Republicans to vote against the Senate agreement, a leadership aide told POLITICO. Scalise and Minority Leader Kevin McCarthy told members during a closed-door conference meeting Wednesday that they will oppose the Senate deal, a sign of where most Republicans are expected to land. Rep. Elise Stefanik (R-N.Y.), the No. 3 House Republican, also announced Wednesday that she would vote against the bill.

“It’s a betrayal of Republican voters. It earns those senators no plaudits that will be durable,” Rep. Dan Bishop (R-N.C.) said about the Senate agreement.

“I don’t think it smells good at all,” said Rep. Brian Babin (R-Texas). “I feel like the bill is gonna open the door to unnecessary gun regulations.”

It’s the latest break between not only House and Senate GOP leadership but also between rank-and-file members over the past year and a half. It’s spanned everything from a bipartisan infrastructure deal and raising the debt ceiling to how to handle the fallout from the Jan. 6 attack on the Capitol.

“My pause, my concern, is due process on these red flag grants,” Rep. Andy Barr (R-Ky.) said, adding that while he and McConnell “agree on a whole lot of things … but we don’t always vote the same way.”

That divide played out in real time on Wednesday. Shortly after McCarthy and Scalise privately announced their opposition, the Senate minority leader publicly touted the bill as a win for Republicans.

“This time is different. This time the Democrats came our way and agreed to advance some common sense solutions without rolling back rights for law-abiding citizens. The result is a product I’m proud to support,” McConnell said.

Sen. John Cornyn (R-Texas), a McConnell ally who helped spearhead the deal, also presented a slideshow during the Senate GOP lunch Wednesday aimed at rebutting criticism from conservatives. Additionally, Sen. Ted Cruz (R-Texas) proposed an alternative deal to the conference, according to Sen. Mitt Romney (R-Utah), that would give “more money for police in schools” and increase penalties on those who use firearms to commit a crime.

Cornyn’s first slide touted “conservative wins,” including funding for law enforcement, that it will “only impact violent criminals and those adjudicated as mentally ill” and that that the enhanced background checks for juveniles would sunset after 10 years, a source familiar with his presentation told POLITICO.

Cornyn also used the slideshow to list provisions that were included in the bill at the request of the NRA, including money for hardening schools, mental health funding and providing exemptions to closing the so-called boyfriend loophole, which restricts the right to firearms for those who have abused their romantic partners. The exemptions highlighted include that limitations would not apply to past relationships unless they were recent.

A separate slide detailed due process requirements that states would need to meet if they use the bill’s funding to create red-flag laws, a key concern for Republicans.

But those assurances did little to win over House Republicans.

“Lots of people up here don’t seem to understand the meaning of conservative,” Bishop said about McConnell and Cornyn touting the deal as having wins for Republicans.

Members of the Second Amendment Caucus, including Bishop, railed against the Senate deal and the GOP senators who support it during a press conference on Wednesday. The group of House Republicans vowed that they would try to defund the legislation if and when they control the chamber.

“We will repeal this. … We will defund this. This is unconstitutional,” Rep. Lauren Boebert (R-Colo.) said.

House Republicans debated the Senate gun deal during their meeting on Wednesday morning. Rep. Don Bacon (R-Neb.) characterized Republicans as having “mixed feelings” coming out of the conference.

“I was hearing people on both sides of the issue,” Bacon said. “I heard one guy that’s going to support it. One guy who is going to oppose it.”

House GOP leadership sent out a notice to their members on Wednesday afternoon urging them to vote against the Senate deal. The notice, which highlights opposition the bill has gotten from outside GOP groups, said the Senate bill “takes the wrong approach in attempting to curb violent crimes” and was an “effort to slowly chip away at law-abiding citizens’ 2nd Amendment rights.”

The opposition from House GOP leadership comes after the Freedom Caucus announced that it would oppose the Senate agreement, raising particular concerns over a provision that would incentivize states to create so-called red flag laws, which allows the confiscation of firearms if someone is deemed a danger to themselves or others.

“Red flag laws permit the preemptive seizure of firearms from Americans without due process by allowing any person to report a gun owner to law enforcement and petition for the confiscation of that individual’s firearms, even before the gun owner has an opportunity to defend themselves,” the ultra-conservative group said in a statement.

The House Freedom Caucus added that Senate Republicans should “use every procedural tool at their disposal to ensure Members of Congress are granted sufficient time to study and analyze any legislative text that emerges from the Senate’s negotiations.”

Rep. Chip Roy (R-Texas), a member of the group, questioned why Senate Republicans would negotiate with Democrats on the bill, given Democrats have “stated objectives to take away our firearms.”

But the Senate GOP gun package picked up at least one GOP supporter shortly before the meeting. Rep. Tony Gonzales (R-Texas), who represents the community of Uvalde, Texas where a shooter killed 19 children and two adults at an elementary school in late May, announced that he would back the legislation in a Twitter thread Wednesday morning.

Gonzales was not among the five House Republicans who voted for the House Democratic guns’ deal earlier this year. That bill would have raised the age for buying a semi-automatic weapon, required background checks for ghost guns and banned the sale of high-capacity magazines, among other provisions.

“As a Congressman it’s my duty to pass laws that never infringe on the Constitution while protecting the lives of the innocent. In the coming days I look forward to voting YES” on the Senate bill, he tweeted.

But the universe of potential GOP “yes” votes on the Senate gun deal likely remains small, closely mirroring the number of Republicans who voted for provisions of the earlier House bill.

Asked if the size of Senate GOP support for the guns deal influenced the universe of House GOP yes votes, Rep. Fred Upton (R-Mich.), one of the GOP yes votes, shrugged it off: “Not really.” He estimated that “about 15 or 20 of us” would vote on the Senate guns legislation.

Upton also pointed to the GOP votes on last year’s bipartisan infrastructure deal as another potential bellwether for House Republican “yes” votes on the Senate’s gun deal. At the time, 13 Republican House members supported the agreement. However, the political dynamics of supporting the development of roads and bridges is wildly different compared to those of a gun reforms package in the House GOP, which has long seen even narrower measures as a prelude to further restrictions on Americans’ gun rights.

Bacon, one of the House Republicans who backed the infrastructure deal last year, on Wednesday praised McConnell as a “smart man” and Cornyn as a “great person,” but said he was undecided on the Senate deal.

“The topline stuff sounds good, but I want to read the bill, because I think the sticking point has always been due process with red flag,” Bacon said. “I think it sounds promising on the high-level side.”

Go to Source
Author: By Jordain Carney and Olivia Beavers