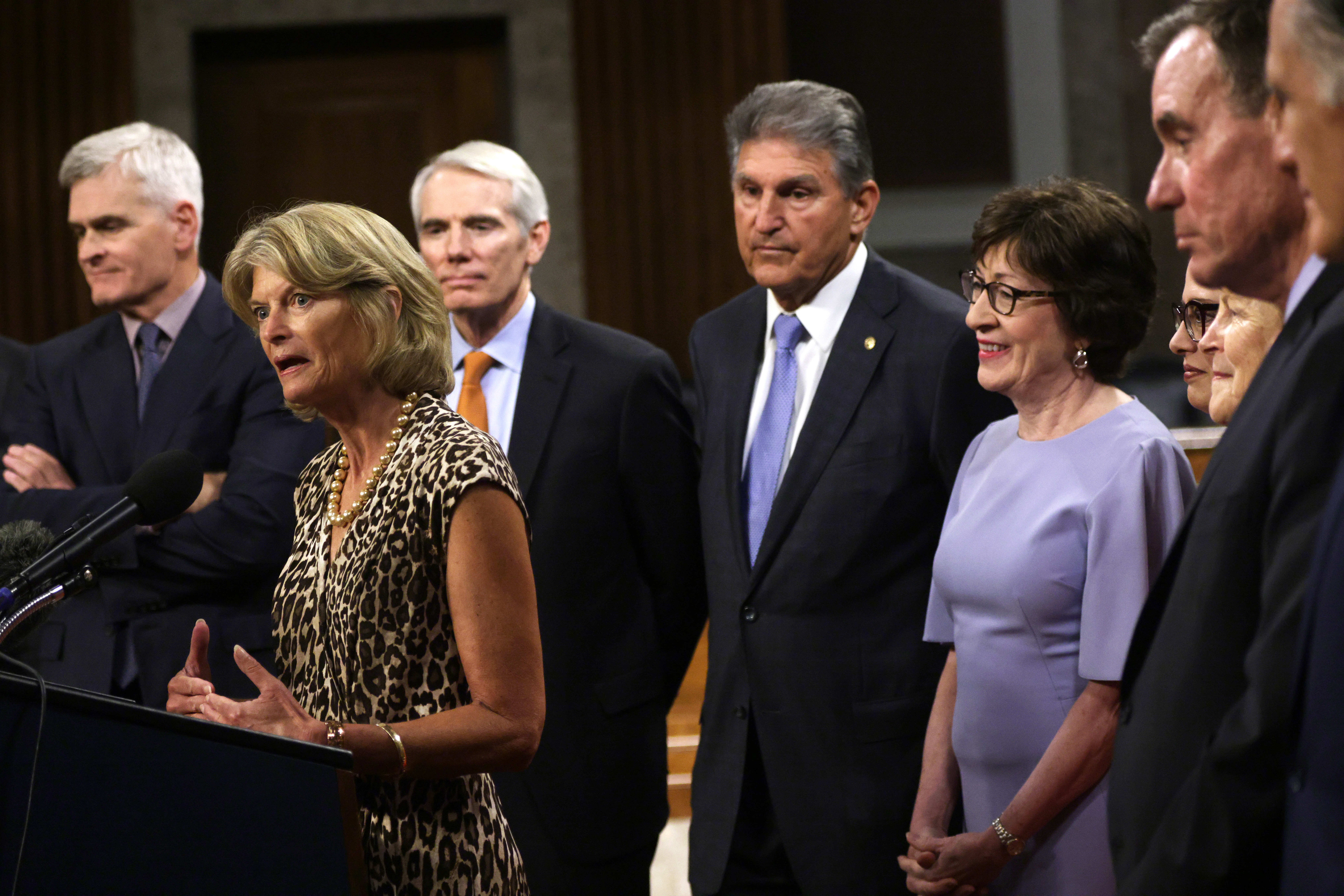 Democrats for Murkowski: Alaska Republican counts her fans across the aisle

Jeanne Shaheen offered to campaign for her. Angus King directed money to her. And Mark Warner’s open to endorsing her whenever it helps most.

No, she’s not a Democrat. She’s Republican Sen. Lisa Murkowski of Alaska.

“I don’t want to get Lisa in trouble … Lisa is one of my very favorite Republicans, and if the Republican Party were comprised of center-right people like her, the country would be much better off,” said Sen. Brian Schatz (D-Hawaii). “She’s a friend. And I think it would be a loss for Alaska if she were no longer serving in the Senate.”

One thing keeping Schatz from endorsing her officially? His state party “calls for the expulsion of anybody who does that sort of thing.”

As Murkowski tries to fend off a challenge from Donald Trump-backed candidate Kelly Tshibaka, the centrist is appealing to a broad home-state coalition that contains many left-leaning Democrats and independents. Murkowski’s Senate Democratic fan club reflects the same crossover clout that helped her quash a tea-party rival 12 years ago — and the fact that many conservatives will support Tshibaka anyway.

Alaska’s new election rules installed an open, top-four primary and a ranked-choice general election runoff, allowing Murkowski to ignore appeals to her party’s right flank and embrace her elevated status among Democrats for her bipartisan positions. And rather than rebuff support across the aisle, Murkowski is hoping for as much of it as possible.

In an interview, she said of Democrats: “I hope they’re going to have my back. Just as I hope the Republicans would have my back.” As she sees it, Democratic support only proves her theory of the case in Alaska’s new Wild West elections system.

It wouldn’t be the first time she prevailed against intra-party haters: In 2010 she won her second term as a write-in by famously running ads that taught voters how to spell “Murkowski.”

West Virginia Sen. Joe Manchin was the first Democrat to endorse her, traveled to Alaska for an event with her this spring and vowed this week to do “whatever I can to help Lisa Murkowski” avoid a loss that would be a “very sad day for America.” And now other Democrats are responding to Murkowski’s wish for across-the-aisle support with enthusiasm.

King, an independent Mainer who caucuses with Democrats, endorsed Republicans in the past: In 2014 he backed former Sen. Lamar Alexander (R-Tenn.) and Sen. Susan Collins (R-Maine). But he’s usually closely aligned with Democrats on the Senate floor, and this cycle his leadership PAC has mostly given to endangered Democrats like Maine Rep. Jared Golden, Georgia Sen. Raphael Warnock, Arizona Sen. Mark Kelly and New Hampshire Sen. Maggie Hassan.

So King’s $5,000 leadership PAC check to Murkowski stands out.

“She has the highest integrity quotient that I’ve seen,” King said in an interview. “If you’re of a persuasion that nothing should get done, she’s not your person.”

Murkowski’s vote to convict Donald Trump in his second impeachment trial is what officially spurred the former president’s endorsement of Tshibaka, even prompting a recent Trump rally in Alaska against the incumbent. But Murkowski was always a thorn in the side of Trumpism: She voted against repealing the Affordable Care Act, did not back Supreme Court Justice Brett Kavanaugh and has proven pivotal to pushing through President Joe Biden’s bipartisan legislative agenda.

Those qualities nearly sank Murkowski in 2010, when she lost a primary but won her write-in campaign.

“She’s never won the easy way,” said Sen. John Cornyn (R-Texas), who added that Murkowski’s centrist and left-leaning coalition “wouldn’t work in other parts of the country but I think it works for her.”

Her path to reelection is eased by her state’s new election rules, but the race is still shaping up to be a nail-biter. It’s not out of the question that Murkowski could lose. The latest poll showed her trailing Tshibaka in every round of voting until the last one, when she picked up almost all of Democrat Patricia Chesbro’s voters.

Murkowski would then win a final head-to-head ranked choice match-up 52-48, according to the Alaska Survey Research poll.

“As long as I’m winning,” Murkowski said of a potential close shave like the one depicted by the poll. She described her coalition as “broad … my supporters have always been kind of the cross-the-board Alaskan: Republican, Democrat, independent, not affiliated.”

Chesbro is running way behind both Murkowski and Tshibaka, and national Democratic leaders are barely trying to contest the race. That gives Senate Democrats the ability to lavish the incumbent with praise — and many hope it might help Murkowski in the end since she’s far more aligned with them than Tshibaka would be.

Of course, Murkowski isn’t with the Democrats on everything: She listened to their arguments on last year’s $1.9 trillion Covid relief bill but rejected it and she voted against a Democrat-backed proposal expanding abortion access, despite supporting the codification of Roe v. Wade.

But the Alaskan has given Democrats a valuable GOP vote for gun safety legislation and infrastructure. She’s even worked with Democrats on voting rights legislation and backed some progressive Biden nominees, like Interior Secretary Deb Haaland and Supreme Court Justice Ketanji Brown Jackson.

“I hope she’s going to come back,” Shaheen said. “I told her I’d be happy to campaign for her, if she thought that helped.”

Such Democratic praise still might alienate some Republicans in the state who potentially have to choose between Tshibaka and Murkowski as their top choice in November. In a statement for this story, Tshibaka said “not one of these liberals has Alaska’s best interests at heart, yet these are Lisa Murkowski’s cronies.”

“In Alaska, she says she is looking out for us, but in D.C. she turns her back on us, and she votes and parties with liberals,” Tshibaka added.

Officially the National Republican Senatorial Committee is backing Murkowski, the only GOP incumbent who backed Trump’s impeachment conviction and is facing voters this fall. The Mitch McConnell-aligned Senate Leadership Fund also reserved $7 million in fall ads on her behalf.

But some Senate conservatives aren’t rushing to her side. Sen. Ted Cruz (R-Texas) said he’s staying neutral, and Sen. Josh Hawley (R-Mo.) stopped short of officially backing her campaign: “I wish her the best. I’m not against her. I basically just focus on Missouri.”

That’s not what you’re going to hear from most Democrats. To them, a Murkowski loss to Tshibaka is unthinkable. It would harm their prospects of working across the aisle and, frankly, deprive many Democrats of a close friend.

“Sen. Murkowski stands up for Alaska,” said Sen. Maria Cantwell (D-Wash.), who works closely with Murkowski on bilateral relations between the two Pacific states. “And that’s what Alaska needs.”