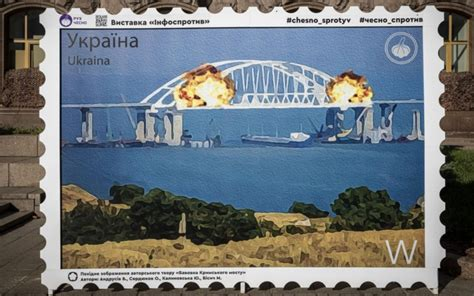 Can The Flood of Lies About Ukraine and Russia Be Stopped?

As someone who worked first hand on the CIA’s Afghanistan propaganda campaign in 1985-86, I feel somewhat qualified to comment on the scale and scope of the current propaganda campaign intended to whip up support in the West for Ukraine and galvanize international outrage against Russia–it is titanic and it is out of control.

Where to start? How about the Kerch Bridge fiasco? Initially, the blast on the west bound span of the bridge was celebrated wildly as a massive triumph for Ukraine and a bitter defeat for Russia. The Associated Press account is representative of the media reactions:

An explosion Saturday caused the partial collapse of a bridge linking the Crimean Peninsula with Russia, damaging an important supply artery for the Kremlin’s faltering war effort in southern Ukraine and hitting a towering symbol of Russian power in the region.

Nobody immediately claimed responsibility for the blast, which killed three people. The speaker of the Russian-backed regional parliament in Crimea accused Ukraine, but Moscow didn’t apportion blame. Ukrainian officials have repeatedly threatened to strike the bridge, and some lauded the destruction on Saturday. But Kyiv stopped short of claiming responsibility.

Any lingering doubt that this bridge bombing was the handiwork of the Ukrainians was erased when Kiev released the mock up of a stamp that will be issued in November celebrating the victory over the Russians:

There is no government in the world that can come up with artwork and get bureaucratic approval to commemorate a terrorist attack in the short amount of time that Ukraine allegedly worked on this. This was a flamboyant gesture of questionable intelligence–sort of like spiking a football and hitting yourself in the stones:

So today, Ukraine is trying to down play its responsibility for the failed mission to take out the Kerch Bridge (yes, failed, because traffic is till flowing over the bridge) and some of Kiev’s more mentally challenged supporters insisted that this was a Russian FSB op. I received an email from one of these clowns, a Mr. Lane, who wrote:

% Reagan “we win they lose” and losing they are. Bigly. The Ukraines had nothing to do with the bridge by the way, that was total FSB work.

Got it? Those Russians are so damn clever and so powerful that they tricked the Ukrainians into making a stamp with the image of two explosions on the Kerch Bridge. Russia can do anything, it seems, when the West wants to paint Moscow as a 21st Century Goliath.

I do believe that Russian intelligence had some inkling of this plot and the people involved before the blast took place. Why? Because of how quickly the FSB began rounding up alleged conspirators.

But the Kerch Bridge fiasco appears to be a tiny white lie compared to the monstrous prevarication the Biden Administration unleashed today with its publication of its 2022 National Security Strategy. Check out this whopper (see page 25):

Over the past decade, the Russian government has chosen to pursue an imperialist foreign policy with the goal of overturning key elements of the international order. This culminated in a full-scale invasion of Ukraine in an attempt to topple its government and bring it under Russian control. But, this attack did not come out of the blue; it was preceded by Russia’s 2014 invasion of Ukraine, its military intervention in Syria, its longstanding efforts to destabilize its neighbors using intelligence and cyber capabilities, and its blatant attempts to undermine internal democratic processes in countries across Europe, Central Asia, and around the world. Russia has also interfered brazenly in U.S. politics and worked to sow divisions among the American people. And Russia’s destabilizing actions are not limited to the international arena. Domestically, the Russian government under President Putin violates its citizens’ human rights, suppresses its opposition, and shutters independent media. Russia now has a stagnant political system that is unresponsive to the needs of its people.

A lot of lies packed into this paragraph. For starters, it looks like the Biden team is engaged in psychological projection when it declares the Russia is pursuing “an imperialist foreign policy” intent on “overturning key elements of the international order.” What? Russia did not “invade” the Donbas in 2014. Ukraine did that. Russia did not unilaterally intervene in Syria, it was asked to provide military aid. It is the United States that violated the supposedly sacrosanct international order by helping engineer the coup that ousted the democratically elected President of Ukraine in 2014, overthrew the regime of Muammar Qaddafi and supplied weapons and training to radical Islamists in Syria that tried to oust Syrian President Assad. Pot calling Kettle Black anyone?

The Biden folks clearly do not understand the concept of irony. On the very day that the Biden Administration releases its National Security Strategy and accuses Russia of “brazenly” interfering in U.S. politics, U.S. prosecutor John Durham was grilling FBI Agents in Federal Court and getting them to admit that the Steele Dossier, which was one of the predicates for investigating Donald Trump for collaborating with Russia to steal the 2016 election, was a lie. FBI Agent Auten conceded under questioning that there was zero corroboration for the outlandish claims in the Steele Dossier:

Q:       And between September 19th of 2016 and October 21st, when the FBI submitted the FISA application, were you able to confirm or corroborate in any of the FBI system the very serious allegations that were contained in the dossier reports?

The FBI also made inquiries with other members of the intelligence community to find corroborative information. They came up empty.

A:        We did receive information back from a number of different agencies.

Q:        Then, as to the information that you received back from the agencies, did they corroborate the specificity of specific allegations that were contained in the dossier reports?

A:        Not corroborating the specific allegations, no.

Simply put, the unfounded claim that Trump was colluding with Russia was a total sham. A lie. A gargantuan lie. But this fact did not stop the Biden folks from trying to keep that turd afloat in the punch bowl.

The penultimate sentence in the opening paragraph on Russia is further evidence of the Biden Adminstration’s complete lack of self awareness:

This outlandish statement from the Administration that has locked up hundreds of protestors for trespassing, that is using the FBI to arrest and harass political opponents and who routinely pressures social media to quash anyone daring to challenge failed administration policies. Alex Berenson is but one glaring example of this abuse. His attempts to report on the failings of the Covid vaccines were quashed by Twitter with the full encouragement of the U.S. Government. Yet, Biden wants the American public to buy into the lie that the biggest threat to their freedom comes from Russia when it is his own government and policies that are stripping away Constitutionally protected rights.

The flood of propaganda and disinformation about Russia and what is going on in Ukraine is not likely to abate in the near term. In fact, Biden and his team appear to be doubling down on spreading outlandish falsehoods. Here is Secretary of Defense Lloyd Austin’s latest ravings:

US secretary of defence Lloyd Austin on Wednesday hailed Ukraine’s “extraordinary gains on the battlefield”, which he attributed in part to “vital” support from Nato allies, including billions of dollars in military aid, along with humanitarian and financial assistance.

“Despite Putin’s new assaults, Ukrainian forces have changed the dynamics of this war,” Mr Austin said at a two-day meeting of Nato defence ministers at the alliance’s headquarters in Brussels.

Does Austin consider Ukraine’s failure to stop Russia’s missile bombardment of the last two days an “extraordinary gain” by the Ukrainians? As long as this kind of delusion infests Western leaders, the slaughter of Ukrainians will continue. If you encounter someone who insists that lies like these cause no lasting harm, you should arrange a trip for that person to the graveyards filling up throughout Ukraine.

The post Can The Flood of Lies About Ukraine and Russia Be Stopped? appeared first on The Gateway Pundit.