The US government has finally taken some action against China.

All equipment made by Chinese companies Huawei Technologies and the ZTE Corporation cannot be sold in the United States, the Federal Communications Commission announced.

The Federal Communications Commission announced on Friday that all equipment made by Chinese companies Huawei Technologies and the ZTE Corporation cannot be sold in the United States.

FCC Commissioner Brendan Carr said in the announcement that devices made by Hytera Communications, Hangzhou Hikvision Digital Technology, and Dahua Technology will not be approved for sale in the U.S. unless they assure that the devices “won’t be used for public safety, security of government facilities, & other national security purposes.”

The vote was unanimous.

By unanimous vote, the FCC concluded that the products posed an “unacceptable risk to [the] national security of the United States or the security and safety of United States persons,” according to a statement.

“The FCC is committed to protecting our national security by ensuring that untrustworthy communications equipment is not authorized for use within our borders, and we are continuing that work here,” said Chairwoman Jessica Rosenworcel.

“These new rules are an important part of our ongoing actions to protect the American people from national security threats involving telecommunications.”

He called the banning a “big deal” but warned there are hundreds of Chinese companies operating in the US which he believes pose a significant risk to the United States.

A stream-of-consciousness thread in celebration of a great professional victory, nearly four years in the making.

US Bans Huawei, ZTE Telecoms Gear Over Security Risk
US authorities announced a ban Friday on the import or sale of communications equipment deemed “an unacceptable risk to national security” — including gear from Chinese giants Huawei Technologies and…

Early 2018. I had been a senior staffer on the National Security Council for a year, running the Cyber portfolio.

One month prior, an un-vetted proposal from another staffer leaked to the press, proposing to nationalize America’s forthcoming 5G network.

Proposals of this magnitude go through EXTENSIVE vetting before getting shared outside the WH. In this case, the staffer played it fast and loose.

The blowback was HUGE.

And so the National Security Advisor called me in to his office and reassigned 5G to me + my team.

My team came in, established a deliberative process, and got back to work.

And the quiet afforded us to dig very deep into the strategic landscape.

2018 seemed like it was going to be a critical year for the telecom industry:

From the technological standpoint, it was an interesting time for consumer demand for wireless capacity:

rapid growth of IOT devices
> live-streaming was growing in popularity

From an industrial perspective, it was becoming apparent that two Chinese telecommunications equipment manufacturers — Huawei and ZTE — were gunning to “lead” the global rollout of 5G networks.

7/
Finally, on the macroeconomic front, the ÇÇP’s “One Belt, One Road” Initiative was in full swing, seeking to tie all of Eurasia together in a single logistical web of mercantilist design.

They were out buying ports, selling their construction services, and more.

8/
This was the context for our NSC team as we asked “what ought the US policy be for 5G networks?”

It wasn’t an easy task.

Inside the government there are A LOT of competing power centers.

Suffice it to say, the team — composed of senior representatives from nearly every Department and Agency in the National Security apparatus — ultimately agreed that Huawei and ZTE posed a national security threat to the US.

10/
We arrived at this conclusion after looking at a wide range of information, including open-source reporting of how Huawei in many cases served as an extension of the intelligence services of the ÇÇP —

As the person now responsible for coordinating all national security telecommunications policy for the United States (in addition to cyber), I saw it slightly differently.

I saw 5G policy through the lens of a great essay by @vgr – breakingsmart.com/en/season-1/

Inspired by @pmarca’s “Software is Eating the World,” @vgr’s 2015 essay reframed the internet as a technology akin to money, or steam power – enabling rapid transformation of society by radically reducing friction.

I had similar thoughts at the time: medium.com/@AreDangerousM…

And so, “now,” (2018), I saw the 5G problem as one that had grand implications. Of the Chinese Communist Party seeking to control the very fabric of the information reality.

We had to stop it.

Our timing was excellent. My team had already been working on the nation’s first ever National Cyber Strategy. We rolled 5G into it, and by late 2018, President Trump signed it: trumpwhitehouse.archives.gov/wp-content/upl… 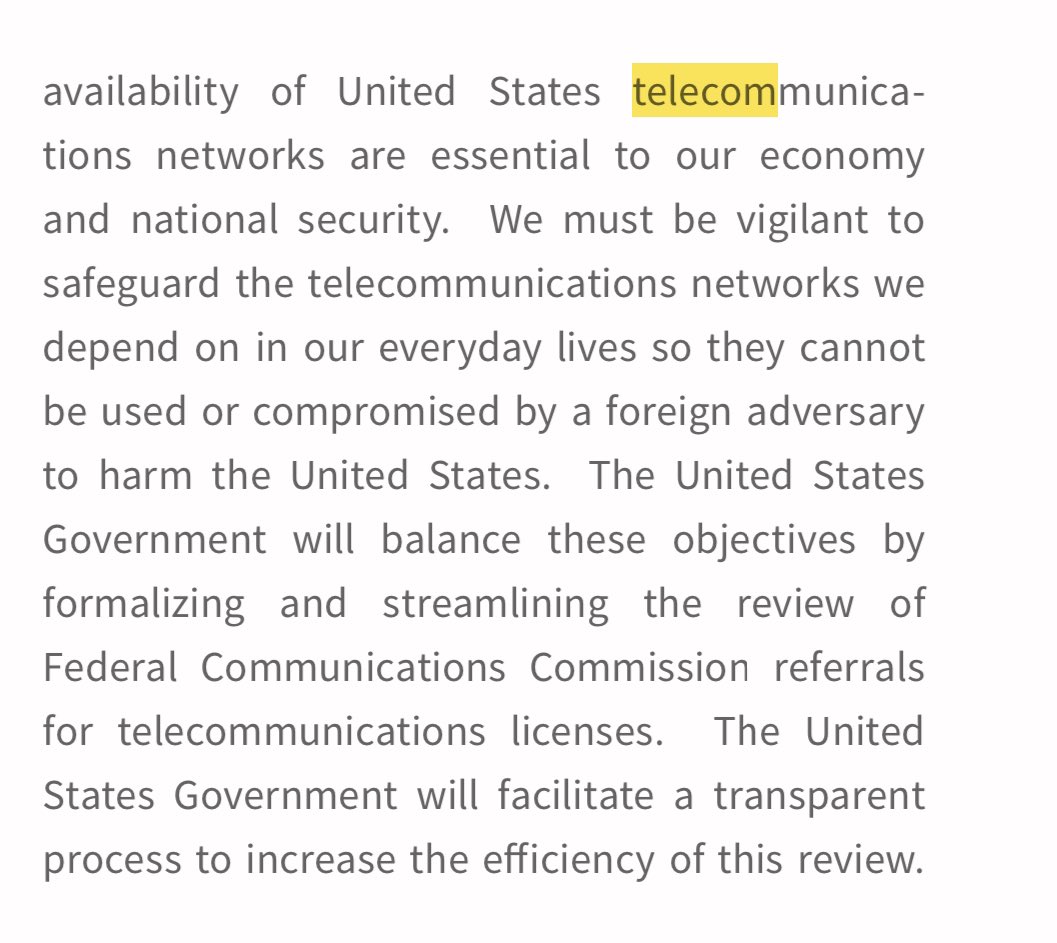 But, ask anyone who has worked in Washington, the publication of a White House strategy is when the work BEGINS.

With the document signed by the President, we set about IMPLEMENTING.

16/
There was a lot to do. First, we had to formalize a long-respected but actually informal process known as “Team Telecom.”

This enabled the US Government — for the first time ever — to block the granting of telecom licenses on the basis of national security.

17/
Second, we had to create a process by which the executive branch could ban malicious companies from doing business in the US.

More on that at some point in the future.

18/
Third, I formed worked closely with @AjitPai, @BrendanCarrFCC and other FCC commissioners to take a hard look at what telecom equipment would be allowed on US networks.

We bonded over our respective mug choices, and desire for a free and open internet.

19/
For the FCC specifically, we were concerned about something called “universal service funds,” which is a tax levied on phone services that ultimately subsidized rural telephone infrastructure build-out.

We didn’t want these subsidy funds going to ÇÇP-backed companies.

20/
At the same time, there was a great deal of work to do abroad with our allies. Some of which had already seemed to have made a decision to allow the ÇÇP to build vast swaths of their telecom infrastructure.

As the fight wore on, others joined in. We were lucky to get an infusion of support when former DocuSign CEO @KeithJKrach was confirmed by the Senate to a key role at the State Department. His enthusiasm for these policies was infectious at Foggy Bottom.

22/
Capitol by Capitol, our team flew around the world, meeting with key partners and policymakers. We explained the second and third order effects, of how the Communist Party might seek to “warp” the information environment for its own ends.

23/
But the domestic fight was the final and most protracted.

You see, in the US, it takes a long time to “implement” policy. Things that started in 2019 took nearly three years to finish.

Which brings us to today.

Finally, after a lengthy and legal process, the FCC has banned not only Huawei, but other Chinese telecommunications infrastructure companies from deploying their equipment on U.S. networks.

Its a big deal. foxbusiness.com/technology/fcc…

FCC bans Huawei and ZTE equipment from being sold in US
The FCC said in a Friday announcement that devices made by Huawei Technologies and the ZTE Corporation cannot be sold in the United States.
https://www.foxbusiness.com/technology/fcc-bans-huawei-zte-equipment-being-sold-us
Those of you who follow me here on twitter (you should!) know that my predecessor on the National Security Council left the White House and almost immediately took a million-dollar-a-year job LOBBYING for Huawei.

Senior Obama Cyber Official Lobbying for China
China’s government-linked telecommunications giant Huawei Technologies has hired a senior Obama administration cyber security official as a lobbyist.
https://freebeacon.com/national-security/senior-obama-cyber-official-lobbying-for-china/
Today, one phase is complete. But lots still to do. There are hundreds of Chinese companies operating in the US – like T1kT0k and DJI – which I believe pose a significant risk to the nation.

Because they are subject to the ÇÇP’s national security law.

27/
The law — Huawei is also subject to it — REQUIRES them to obey the secret orders of the Communist Party. To install back doors, and more. And mandates they lie about it when asked.

No accountability, except to a government that seeks to undermine free people’s everywhere.

28/
Lots to do. But today is a great day. Thanks to the bipartisan coalition on the FCC that unanimously supported the rule. And to the members of the current administration that have kept up the pressure.

The post “Big Deal” — FCC Bans Chinese Huawei From Selling In The US –Trump Staffer Tells The Behind-The-Scenes Story appeared first on The Gateway Pundit.